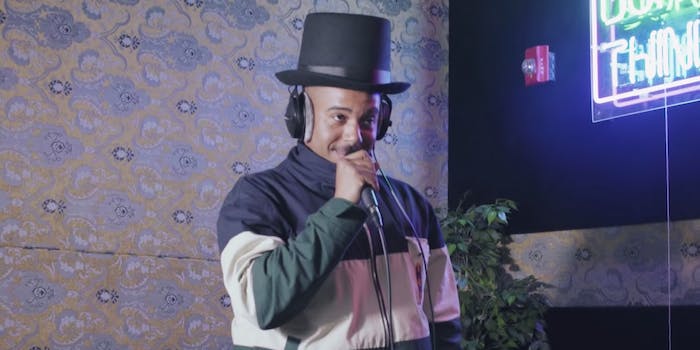 'Who tf is Zack Fox and why does it say I reported him?'

Internet Renaissance man Zack Fox has been permanently suspended from Twitter. Fox has received temporary suspensions prior, but his comments regarding police bodycam footage acquired by the Dallas Morning News appear to have been the cause for his permanent removal.

In the footage, Dallas police officers openly mocked a schizophrenic man–who had called them for help–as they were killing him.

Fox is known for his stand-up comedy and art. He even went on tour with musician Thundercat. Fox’s most consistent creative outlet, however, is being a funny internet guy. Upon receiving his verification check mark, Fox’s first action on Twitter was to impersonate the official account for Billboard and claim that polarizing rapper Blueface’s hit song “Thotiana” had reached the number one position on the chart.

Recently, Fox had another viral experience through his song “Jesus Is The One (I Got Depression).” The song blew up, in part, because of its hook, “Imma dip my balls in some Thousand Island dressing, cause I got depression” and exploded in popularity as audio on TikTok. The song currently has over 5 million streams on Spotify alone.

Zack Fox is Number One on Spotify’s Viral 50 with “Jesus Is the One (I Got Depression),” a song he describes as “meaningless” and “terrible” https://t.co/T30IhJIxvm pic.twitter.com/xnGw3PPX6t

In the Genius verified video for the song, Fox says things like, “Free Palestine. Zionists, eat shit,” and “I would use Ben Shapiro’s body like a fleshlight.” It’s clear to see how Fox’s words could incite anger among a certain demographic.

Typically, when you report an account on Twitter, you will receive an update on the report if the account faced any form of disciplinary suspension. Twitter users are receiving notices of successful reports against Fox’s Twitter account. The odd thing about this, however, is that many of those accounts don’t even know who Fox is.

“Who tf is zackfox and why does it say I reported him?” one questioned.

so @Twitter is sending false page report confirmations about @zackfox bein suspended to people who say that they have never reported nor even heard of him. pic.twitter.com/mTQe2xv3xL

Fox outlined his current theory about it on Instagram and urged Twitter users to up their security.

“My theory is that a third party got a hold of a ton of people’s information and used their account info to generate false reports on me … just for saying shit they don’t like about cops or white terrorism in general,” Fox wrote. “Check your app permissions and change your passwords cuz this is a whole ass MESS.”

While the cause of Fox’s account suspension is still up in the air, the false mass reporting of a verified user with nearly half a million followers would appear to be a huge oversight by Twitter support and security. The problem would extend far beyond just Fox’s suspension if a third party did indeed take over Twitter users’ accounts to generate the reports.

The Daily Dot has reached out to Twitter and Zack Fox.