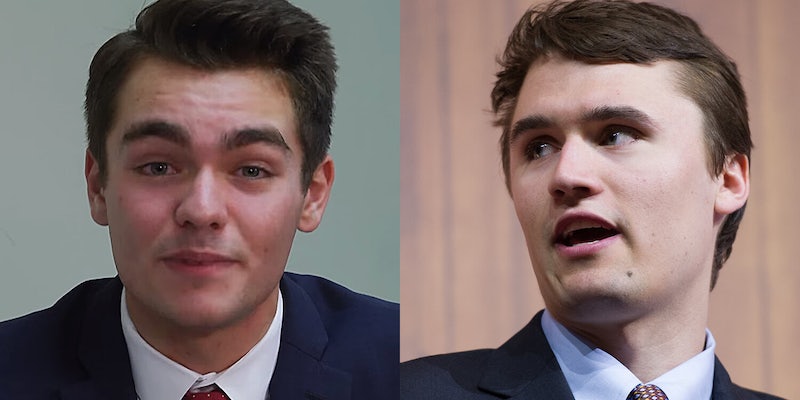 An internet feud between pro-Trump conservative Charlie Kirk and far-right white nationalist Nicholas Fuentes has moved from Twitter onto the main stage.

It’s a schism among young right-wingers that reveal the ideological fault lines within Trump’s Republican party.

Fuentes, a white nationalist, is no stranger to controversy, having stated that he wanted to see CNN reporters “arrested and deported or hanged.”

Just white nationalist and alt-right darling Nick Fuentes saying that he wants CNN reporters to be “arrested and deported or hanged.” pic.twitter.com/mCUTcFqv5k

Kirk, a right-wing pundit and chairman of TP USA, a youth conservative student organization, is one of the biggest faces of the more presentable wing of Trumpism.

On college campuses around the country recently, Kirk took heavy questioning regarding his support for Israel, his stances on free speech, and homosexuality, which Fuentes’ far-right supporters made go viral. That resulted in a cascade of questions, as more white nationalists sought their moment of fame by debating and challenging Kirk at TP USA events.

It came to a head at Politicon, a carnival-style politics convention aimed at fostering debate. There, last month in Nashville, the 21-year-old Fuentes attempted to take a picture with Kirk before being stopped by security.

Fuentes, who was barred from CPAC this past year, continued to provoke Kirk at Politicon by posting images depicting him “conquering” a TP USA booth on display.

Thanks to my friends on the inside at Turning Point for letting me take the last shift at the booth at Politicon! Had a blast talking to fellow campus conservatives about what it really means to be Right Wing. pic.twitter.com/Q9si3dzzLQ

Kirk was later notified by Politicon security staff about the incident, resulting in Fuentes being barred from Kirk’s debate against Kyle Kulinski, a political commentator with The Young Turks.

.@charliekirk11 is too scared to allow @NickJFuentes in to hear his speech at Politicon. Charlie using law enforcement as personal security to protect him from free speech is based pic.twitter.com/RiCs9bAsYV

The antics continued when Fuentes took swipes at Kirk online. He also then took the battle to a campus speech hosted by Kirk’s national student organization.

At a “Culture War” presentation at Ohio State University hosted by TP USA on Oct. 29, Fuentes allegedly planted who he calls “groypers” in the audience to blast Kirk—along with Rob Smith, a liberal turned conservative—with questions regarding their conservative views, especially when it comes to homosexuality and free speech.

Groypers are Fuentes’ loyal followers, voracious in their support of him. It’s also a reference to the Pepe the Frog derivative white nationalists use, another in a long line of memetic green frogs.

During the Q&A portion of the event, Patrick Casey, a friend to Fuentes and fellow white nationalist, pressed Kirk on his “free speech” position and how TP USA fired Ashley St. Clair, a former TP USA employee, for taking a picture with Fuentes at a party with neo-Nazis and white nationalists.

When Casey pressed on the matter of Fuentes, Kirk fired back.

“I don’t debate trolls,” he said. And to Casey’s challenge to a debate, Kirk retorted, “…I have no idea who you are.”

In responding to the firing of St. Clair, Kirk stated the St. Clair matter was “resolved internally.”

Patrick Casey, a white nationalist, and friend to Nick Fuentes went after Charlie Kirk tonight at a TPUSA event… pic.twitter.com/B33Kwwwp2g

Smith, a gay man himself, responded to who he billed as a “troll” by stating, “Its a B.S. question, and you know it is,” before Kirk interrupted to say he doesn’t “care about what two consenting adults do.”

Kirk then declared that the student’s hyperfocus on the question was a bit “weird.”

In America, what happens between two consenting adults is their business

The Daily Dot attempted to reach Kirk, Smith, and a TP USA spokesperson for comment on this story, but none responded.

Fuentes blocked this reporter on Twitter and he was unable to be reached for comment multiple times.

The squabble between Kirk and Fuentes traces back to March, when a TP USA student group at Iowa State University invited Fuentes to speak. His appearance resulted in backlash around the country against the conservative student organization. The “war” against Kirk and TP USA stems from the outsized influence on the conservative youth movement it has, offering what white nationalists believe is an inherently sanitized version of conservativism that cedes too much ground on cultural issues.

Fuentes envisions leading “zoomers” and young college students towards a nationalist movement, with an army of supporters.

Our movement gives no quarter to Holocaust deniers and anti-Semites.

The Daily Dot reached out to Johnson for comment but did not receive a response.

Johnson is not alone. Other conservative commentators and right-wing pundits have stepped out to disavow and condemn Fuentes over his continued attacks against Kirk

Folks – the point of the anti-@charliekirk11 campaign is not to push Charlie on nationalism, or to stand up for free speech

It's to attempt – foolishly – to mainstream anti-semitism pic.twitter.com/I1LZELsT4l

This person is Evil.

How is Holocaust denier @nickjfuentes still on Twitter and VERIFIED?? https://t.co/nDGfIYBlmo

Anti-Semitic Holocaust Deniers like @nickjfuentes should never have been verified by @jack.

Fuentes responded by saying that Gorka is “the most cucked Hungarian I’ve ever met.”

Gorka did not respond to a request for comment.

One of Fuentes’ few allies, right-wing internet troll Jacob Wohl, came to Fuentes’s defense on Telegram against Gorka, saying, “Remember when Sebastian Gorka disgraced the Trump Administration by wearing the pin of a Hungarian Neo-Nazi organization to the inauguration?”

Wohl continued, “I answered questions from dozens of ‘Groypers’ in Miami and didn’t melt down like a little bitch.”

Fuentes, unfazed by the calls to be deplatformed, stated, “…young America First nationalists are rejecting the controlled opposition in our party and they think they can make an example out of me. Well FUCK YOU! This Culture War is only beginning.”

The vipers are out today! After me and the thousands of America First zoomers in our movement HUMILIATED Charlie Kirk last night, now all the proxies from conservative inc are out to get me. They simply expose the fragility of their subversive globalist cadre.

Here is the fat MAGA grifter Sebastian Gorka effectively calling for me to be banned from Twitter. I thought conservatives were against tech censorship? It is incredible how these people expose themselves when their flimsy ideas are attacked. pic.twitter.com/H2pciacyP6

But in light of the spectacle at Ohio State, a select smaller group of students have tweeted about publicly leaving their respective TP USA chapters at their schools over Kirk’s “hypocrisy” when it comes to free speech and Kirk’s acceptance of gays.

Statement on my resignation from @TPUSA:

It is time for me to move forward and resign from @TPUSA_KSU, @TPUSA.

I wish you the best and hope you will do great on a national standpoint, as long as you are consistent with your values. The potential is there. pic.twitter.com/JmyHTc3270

Mike Cernovich, a new-right documentary filmmaker and provocateur extraordinaire, tweeted a defense of Fuentes against the growing calls by fellow conservative for Fuentes to be banned on Twitter.

Quite alright to find Nick Fuentes offensive, even odious or whether terms are in vogue. No one is obligated to share a stage with him.

Seeing conservatives demanding he be banned from social media, WTF.

Fuentes, on his late-night YouTube live stream “America First,” recently declared that the presence of white nationalist voices at the TP USA “Culture War” event at Ohio State is just the start of their campaign, which will continue at CPAC 2020.

And Kirk’s organization will be forced to endure the slings of 1,000 trolls.