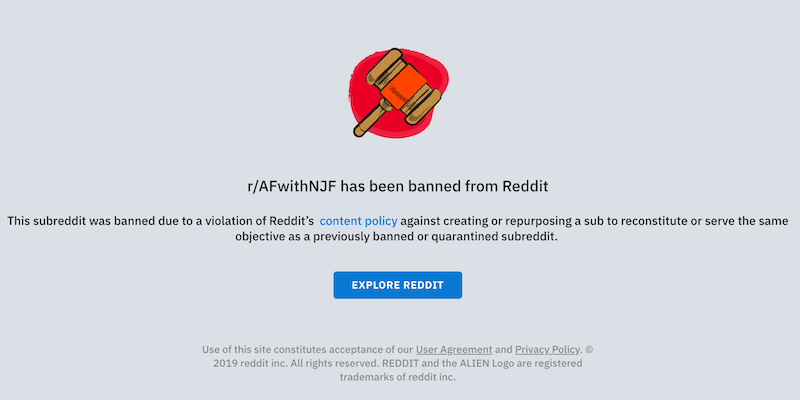 Nick Fuentes, a white nationalist host of a far-right YouTube show, may have been riding high from having Ben Shapiro rebuke him and his far-right followers for thirty minutes last night during a Stanford speech, but he also just lost a way to connect with newfound fans.

The subreddit purportedly had 4,000 subscribers, and featured everything from memes of Fuentes holding knives to disparaging remarks about gay couples.

Findings by The Daily Dot also reveal the subreddit was a place for Fuentes’ followers to expose and target individuals whom they despise.

Fuentes, along with his followers, have recently been showing up at conservative campus speeches to challenge speakers such as Charlie Kirk and Shapiro over their views.

Fuentes, a white nationalist, argues their policy viewpoints don’t go far enough to stop immigration and don’t address a “demographic change,” which he views as a threat to a “white majority” in the United States.

According to the note which Reddit has posted on the now-banned subreddit, the page was shut down for “creating or repurposing a sub to reconstitute or serve the same objective as a previously banned or quarantined subreddit.”

Prior to the America First subreddit ban, other Reddit pages associated with Fuentes and his followers were also banned, including r/nickernation.

Fuentes did not respond to the Daily Dot’s request for comment.

Previously, he has claimed to be “two percent African” and “twenty-five percent Mexican,” which says helps him to “not get banned” from social media.

Today in this Nick Fuentes & Jesse Lee Peterson interview, Fuentes alleges he is "25 percent Mexican" and "2 percent African," which he declares helps him not get banned from social media… pic.twitter.com/Fo7WLAOgGH

Fuentes denies he is a white nationalist.

The 21-year-old leader of nickernation has also been booted off of Twitch, a live streaming service. Fuentes went off on a profanity-laced rant against Twitch in light of the ban.

Twitch did not respond to a request for comment on why Fuentes was banned.

Fuentes’s followers responded to the Reddit ban by voicing their opinions on Twitter, smearing the site as being “gay” and “cringe.”

Twitter and YouTube did not return comments to the Daily Dot regarding whether they plan to take similar action against Fuentes.