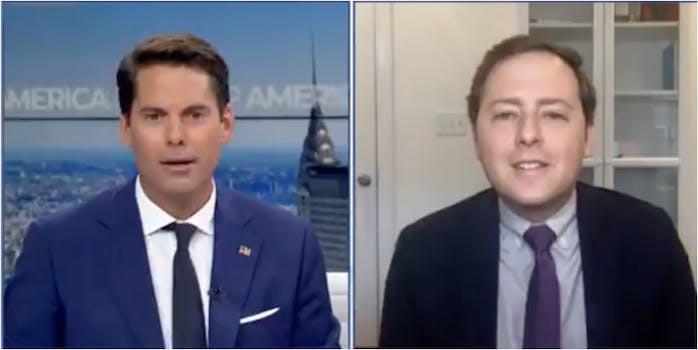 David Litt used SNL to pivot to talking about a 2020 election defamation suit.

Newsmax anchor Rob Finnerty featured Litt on Wake Up America in a segment about Tesla’s Elon Musk and SNL. But instead of talking about that, Litt compared the comedy of SNL to the lawsuit Newsmax had brought against it by a Dominion Voting Systems worker.

A security director for Dominion sued Newsmax for spreading conspiracy theories about him as part of an election fraud push after President Joe Biden won the 2020 election. Newsmax eventually settled the lawsuit and apologized.

Litt used the prompt about SNL to troll Finnerty about the lawsuit.

During the interview, Finnerty admitted that he did not watch SNL because he does “not think it’s funny anymore” before asking Litt for commentary.

“What did you think of Elon Musk’s performance? This is the first time since 2015 that we’ve had a non-athlete, non-entertainer on the show. The last person to do that and do well with great ratings was our former President Donald Trump,” the anchor asked.

Litt immediately responded by criticizing Newsmax for lying to listeners about election fraud.

“Well Rob, that’s a great question. What happened on SNL this weekend was people made stuff up and then said it on television like its true. That actually happens pretty frequently on American TV. For example, in 2020 Dominion Voting Systems sued Newsmax over its false claims about election fraud. Newsmax was lying to its own viewers, and Newsmax had to settle that lawsuit. I just need to check in, are you still telling that lie or are you telling new lies?

Finnerty promptly ended the interview by saying: “I know this is a very funny moment for you. I’m sure you didn’t sleep last night as you prepared to try and sort of ‘get’ the morning anchor on Newsmax. I’d be happy to talk with you about whatever you want to talk about. Obviously, it’s not the topic that we have set up for right now.”

While he didn’t want to talk about the lawsuit during the interview, Newsmax did comment on the Dominion lawsuit by issuing an apology for their claims about employee Eric Coomer in April.

“On behalf of Newsmax, we would like to apologize for any harm that our reporting of the allegations against Dr. Coomer may have caused to Dr. Coomer and his family,” the statement read.

It also admitted that there was “no evidence” of Coomer participating in election fraud.

Litt told the Wrap he was “surprised” he was invited onto Newsmax, adding: “Clearly they hadn’t Googled me.”