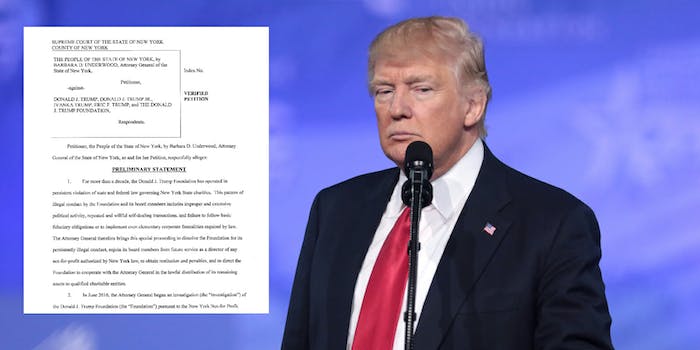 The attorney general called the foundation an 'empty shell.'

The New York State Attorney General’s office said on Thursday that it is suing the Donald J. Trump Foundation, claiming that it violated campaign finance laws and coordinated with President Donald Trump‘s 2016 campaign.

In a petition filed in the New York’s Supreme Court, the attorney general’s office argues that the president’s foundation operated in “persistent violation of state and federal laws” surrounding charities in the state and argues that it should be dissolved. The suit calls the Trump Foundation an “empty shell” with “no oversight” by its board. In one instance, it notes a board member didn’t even know he was serving on the Foundation’s board.

“This pattern of illegal conduct by the Foundation and its board members includes improper and extensive political activity, repeated and willful self-dealing transactions, and failure to follow basic fiduciary obligations or to implement even elementary corporate formalities required by law,” the suit reads.

The suit names the president and the foundations directors: Donald Trump Jr., Ivanka Trump, and Eric Trump. It alleges that the foundation made transactions to benefit Trump’s “personal and business interests” and aims to get $2.8 million in restitution.

“As our investigation reveals, the Trump Foundation was little more than a checkbook for payments from Mr. Trump or his businesses to nonprofits, regardless of their purpose or legality,” New York Attorney General Barbara Underwood said in a statement. “This is not how private foundations should function and my office intends to hold the Foundation and its directors accountable for its misuse of charitable assets.”

The claims by the Attorney General include:

Trump responded to the suit almost immediately on Twitter.

The sleazy New York Democrats, and their now disgraced (and run out of town) A.G. Eric Schneiderman, are doing everything they can to sue me on a foundation that took in $18,800,000 and gave out to charity more money than it took in, $19,200,000. I won’t settle this case!…

….Schneiderman, who ran the Clinton campaign in New York, never had the guts to bring this ridiculous case, which lingered in their office for almost 2 years. Now he resigned his office in disgrace, and his disciples brought it when we would not settle.

You can read all of the New York Attorney General’s petition here.