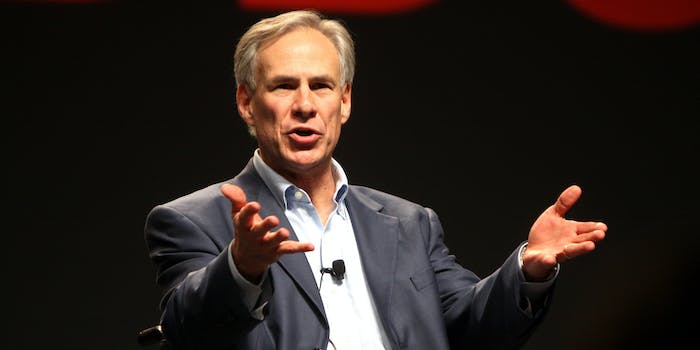 The law is already being called 'unconstitutional and dangerous.'

Texas Gov. Greg Abbott (R) signed a controversial law on Thursday that prohibits big tech companies from banning or blocking users based on the “viewpoint of the user.”

The law, HB 20, is almost certain to face legal challenges like a similar law that was passed in Florida did earlier this year. The Florida law was signed, faced a lawsuit, and was subsequently blocked by a federal judge.

Specifically, the Texas law would not allow a social media platform like Facebook, Twitter, or YouTube to “censor a user, a user’s expression, or a user’s ability to receive the expression of another person” based on a person’s “viewpoint.” The law would also allow for private citizens and the Texas attorney general to sue social media companies for violating the law.

The law was created in response to claims by Republicans that social media sites are suppressing conservatives online, a claim that lacks significant evidence.

Abbott, in a statement released after signing the law, alluded to those claims.

“Social media websites have become our modern-day public square. They are a place for healthy public debate where information should be able to flow freely—but there is a dangerous movement by social media companies to silence conservative viewpoints and ideas. That is wrong, and we will not allow it in Texas,” Abbott said.

Much like the social media law in Florida, the Texas law faced immediate pushback, specifically claims that it violates the First Amendment rights of social media companies to moderate content.

NetChoice, a tech lobby group that was was part of an effort to sue Florida’s law, called the Texas law “unconstitutional and dangerous.”

“By empowering the government to control online speech, HB 20 clearly violates the First Amendment,” Steve DelBianco, president of NetChoice, said in a statement. “This law essentially creates a new Fairness Doctrine for the internet which will only make it harder for conservatives to share their news and views online.”

DelBianco continued: “HB 20 has the same First Amendment flaws as the Florida law that a federal court blocked this summer. The same outcome will almost certainly occur in Texas.”

Meanwhile, Eric Goldman, a professor at Santa Clara University School of Law, told the Washington Post that the new law in Texas doesn’t “survive critical scrutiny.” He added that both Texas and Florida’s laws “represent an effort to play for partisan crown, not to make good policy.”