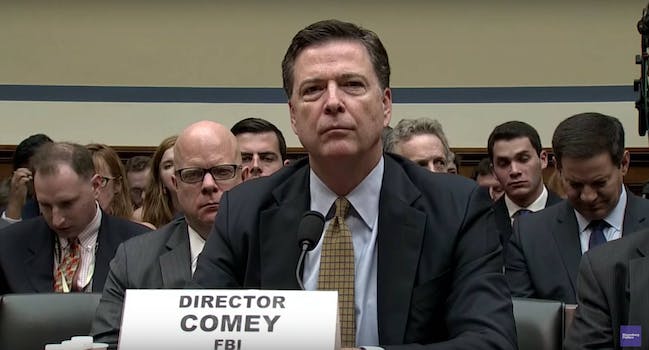 Turns out most of the emails were duplicates.

After nine days of speculation that dragged the Federal Bureau of Investigations and its practices under a glaring spotlight, FBI Director James Comey has released a new statement on the recent, explosively reported Hillary Clinton email review. Sent to several members of Congress, including Utah Republican Jason Chaffetz who set the political world ablaze when he broke news of the new email review last week, Comey’s new letter has effectively closed the books on the issue.

Addressing the recently discovered trove of emails found on a laptop belonging to top Clinton aide Huma Abedin and her estranged husband Anthony Weiner, Comey concluded that the FBI’s decision in July not to indict Clinton over her use of a private email server has not changed. In other words, whatever (if there was even anything new) that was found in the emails did not rise to the level of criminal wrongdoing, and will have no legal impact on Clinton going forward.

According to NBC News’ Pete Williams, almost all of the emails were duplicates that had already been reviewed during the FBI’s initial investigation.

Here’s the full letter Comey sent to Congress, which lauds the hard work of the FBI in reviewing a huge amount of material in a short period of time.

New Comey letter: FBI has not changed its conclusion regarding Clinton use of personal email server pic.twitter.com/IdKT1gweMf

What this means is that, in all the tumult of the last week, the final outcome was as favorable to Clinton’s candidacy as it possibly could have been. While it’s hard to discern just how much the initial news of the new email review hurt the Democratic nominee in the polls, it’s undeniable that the story dominated the news for a full week prior to Election Day, and more or less took the spotlight off of Donald Trump entirely.

Now, with the FBI having confirmed that there’s nothing new or actionable in the emails?emails discovered in the course of an investigation into Weiner’s alleged sexting with an underage girl?the Clinton campaign’s rhetoric, criticizing the FBI for divulging the sensitive, ambiguous information in the first place can be seen as validated.

It remains to be seen how the Trump campaign will formally respond to the news, though campaign manager Kellyanne Conway has already gone after the Clinton campaign and surrogates like Newt Gingrich and Omarosa have insinuated that corruption is afoot.

Then why did you, your colleagues, and your candidate attack Comey and his credibility? https://t.co/GjPeV8pWsr

Comey must be under enormous political pressure to cave like this and announce something he cant possibly know.

Trump himself had insisted the system was rigged against him when Comey declined to indict Clinton in July, then mused that “it might not be as rigged as I thought” after Comey revealed the new email review.