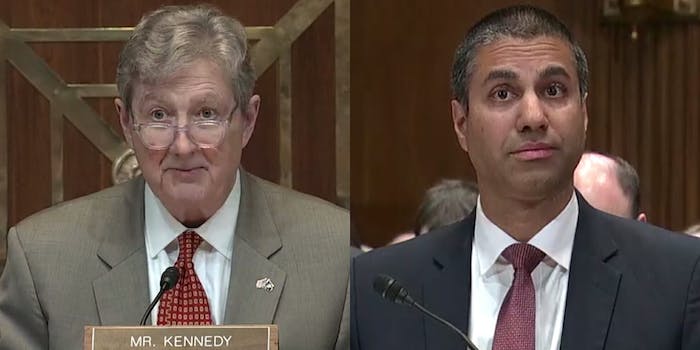 Sen. John Kennedy says its time for Congress to ‘act’ on net neutrality

Sen. John Kennedy (R-La.) said on Tuesday that he felt it was time for Congress to “roll up our sleeves” and pass a net neutrality bill.

“So-called net neutrality is hugely important to the American people, and many reasonable people have different points of view on what we ought to do,” the senator said during his opening remarks. “The problem is that regardless of what one thinks about the correct course with respect to net neutrality, we need to pick a course and stick to it because it’s very, very, hard for people and consumers who rely upon net neutrality and have to comply with our rules. It’s very hard when we have the policy bouncing around like a ping-pong ball.”

Kennedy continued, saying the onus of net neutrality is now on Congress.

“What I’m saying is, this is one person’s opinion, but it’s really time for Congress to act. We need to roll up our sleeves. I think we have more in common than we don’t. We need to stop passing the buck, and we need to pass a net neutrality bill,” he said.

The Louisiana senator is one of a few Republicans who voted in favor of a measure that would have undone the FCC’s repeal of net neutrality. Last year, during an attempt by Democratic lawmakers to use the Congressional Review Act (CRA) to nullify the repeal, Kennedy was one of three Republicans in the Senate who voted in favor of it. The CRA died in the then-Republican-controlled House.

This year, Democrats have introduced the Save the Internet Act, which would undo the FCC repeal by restoring the 2015 Open Internet Order, in the Senate. The bill passed 232-190 in the House of Representatives last month, but was marked as “dead on arrival” in the Senate by Majority Leader Mitch McConnell (R-Ky.).

In April, Kennedy told a Washington Post reporter that his views haven’t changed since the CRA vote. His vote—if the bill were to eventually make it to the floor—would again be critical for it to pass.

Meanwhile, Sen. Kyrsten Sinema (D-Ariz.)—the only Democrat in the chamber who has yet to cosponsor the bill—formed a working group with Sen. Roger Wicker (R-Miss.) to find a “bipartisan solution.”

The bill, if passed in the Senate, would have to be signed by President Donald Trump. The White House has signaled it would veto it.

Following the senator’s opening statement, Sen. Chris Coons (D-Del.), the ranking member of the subcommittee, said he agreed with his colleague and said he felt it was time to end the “several year-long fight” and for Congress to “legislate responsibly.”