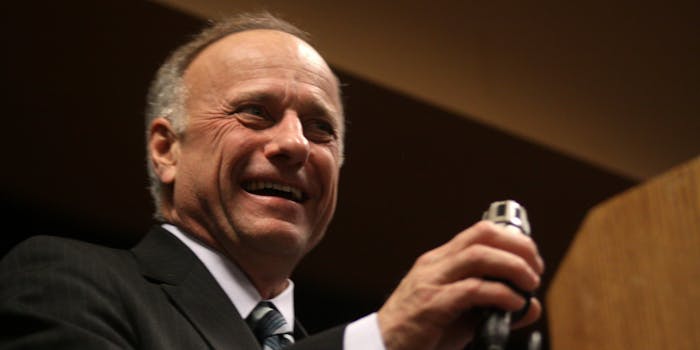 NBC News reportedly told its writers not to refer to Iowa Congressman Steve King’s (R) comments as “racist,” according to information shared with the Huffington Post.

The reporters received an email on Tuesday that read, “Be careful to avoid characterizing [King’s] remarks as racist. It is ok to attribute to others as in ‘what many are calling racist’ or something like that.”

The Huffington Post said it confirmed the email with two NBC employees who shared it with them. It was sent by someone from the Standards and Practices team.

After Huffington Post published the email, however, NBC updated its policy, saying it was OK to call King’s comments racist, while mentioning his history of making racist remarks.

2. Updating my story: NBC News standards has revised their guidance on Steve King and his racist comments. https://t.co/Oc3aRCaxoO pic.twitter.com/ji0hcR7Uh4

King, a Republican Congressman for Iowa, has a long history when it comes to this. He reportedly endorsed a far-right mayoral candidate in Toronto, and met with members of a far-right Austrian party, where he bemoaned the “decline” of Western civilization.

But it wasn’t until last week that he came under fire even from those who have supported him over the years, when he told the New York Times, “White nationalist, white supremacist, Western civilization—how did that language become offensive? Why did I sit in classes teaching me about the merits of our history and our civilization?”

He was removed from the Judiciary and Agriculture Committees on Monday, in what New York Times claims is a response to his remarks to the publication last week.

King also announced today that he would vote in favor of a resolution condemning white supremacy.