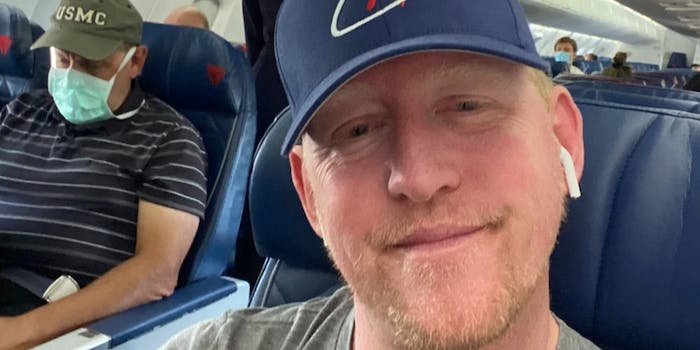 A man wearing a Marine hat and face mask is seated right behind him.

Robert O’Neill, the former Navy SEAL credited with killing Osama bin Laden, stirred controversy on Wednesday after bragging about not wearing a mask while onboard a flight.

While seated inside the plane, O’Neill photographed himself without a mask and tweeted out a disparaging comment about those who had covered their faces.

While it’s unclear whether the comment was directed at anyone in particular, an elderly man behind O’Neill wearing a mask and a U.S. Marine Corps (USMC) hat can be seen.

The tweet led to an immediate backlash from those who felt O’Neill was not only mocking the man but endangering other passengers as well.

In a series of now-deleted tweets, O’Neill went on to defend his decision not to wear a mask.

“Do you remember the complete, incompetent morons buying all of the toilet paper?” he added. “They’re the ones telling you to wear masks now.”

O’Neill even went as far as to claim that masks provide no protection whatsoever, despite ample evidence to the contrary.

“I know more about biological warfare than most of you. We were trained,” he continued. “These dumb ass masks do nothing. Nothing.”

Twitter users quickly learned that O’Neill had been traveling on a Delta Airlines flight and bombarded the airline with questions regarding the incident.

Delta responded to one man online by noting that it does require all passengers to wear face masks.

The company did not, however, disclose whether it intended to take any action against O’Neill.

Not long after O’Neill’s remark was made, his initial tweet dissapeared.

The ex-Navy SEAL reappeared on Twitter to blame his wife for removing his tweets.

O’Neill then challenged what he described as the “mob” to “come get some.”

The acronym “USMC” also trended on Twitter as users leapt to defend the man included in O’Neill’s picture.

As several users pointed out, O’Neill was demoted from SEAL (Sea-Air-Land) to SEL (Sea-Land) after being kicked off of a flight in 2018 for being intoxicated and harassing a flight attendant.