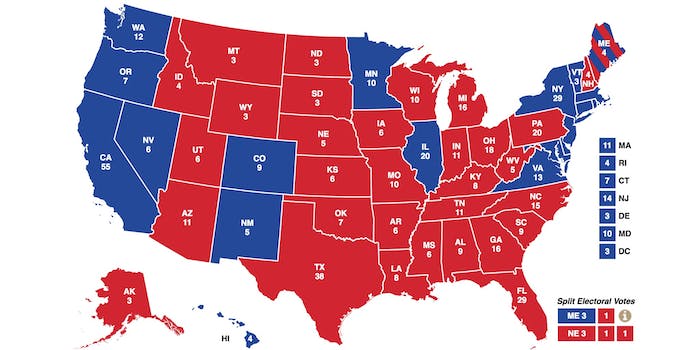 Out of the past five U.S. presidential elections, the Electoral College has failed to select the president chosen by the people twice—a 40 percent failure rate. Thankfully, there’s a solution.

First drafted in 2006, the National Popular Vote Interstate Compact would provide a way to give that power back to the people by promising every electoral vote go to the overall popular vote winner. Since it only takes 270 electoral votes to win, the compact effectively only needs that many electoral votes to work. So far there are 14 states, plus the District of Columbia, that have passed the compact into law. This totals 189 combined electoral votes, just 81 votes short of becoming a reality.

But if Nevada Governor Steve Sisolak signs the National Popular Vote bill, recently passed by the Nevada Senate, that will bring the total of participating electoral votes to 195. Eight other states have passed legislation in one house, placing another 76 electoral votes within reach. It seems to be one of the few issues that has bipartisan support, also making headway in GOP-controlled Missouri and Georgia.

The push for changes to the Electoral College has new life after Democrat Hillary Clinton won the popular vote while losing the electoral vote to Republican Donald Trump, echoing former Vice President Al Gore’s electoral loss to George W. Bush. Movement toward this goal is already in the works.

Pennsylvania, Michigan, Missouri, and Arizona all have pending legislation. Their electoral votes would be worth 57, which would bring the total to 246 if they pass the compact at the state level, leaving just 24 electoral votes needed.

It’s a short path from there to ending “swing states.” There won’t be “fly-over” states, because your individual vote will suddenly become much more valuable. Single red voice in a blue sea? Proud blue in a wide, red patch? We’d all likely feel less disenfranchised with politics in general if we felt that our voice mattered—although high-population states like New York, California, and Texas would likely get a lot of attention.

The growing spikes showing the interest in the ‘national popular vote’ are a promising indicator that more and more people are ready to dispose of an outdated system.

Even this guy feels strongly about it.

If you live in a state that hasn’t signed on and want to see this change happen, contact your legislators.