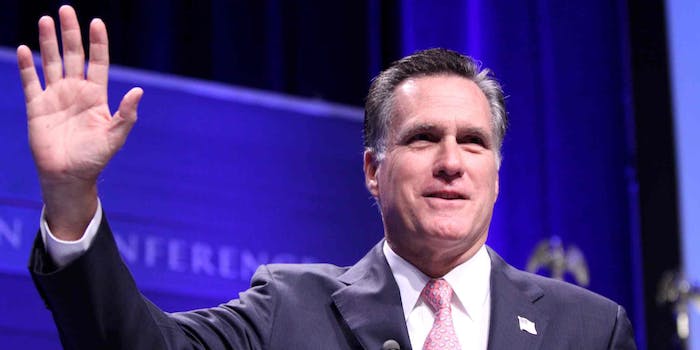 Former Massachusetts governor and perpetual evil-billionaire caricature Mitt Romney announced in a call with top donors on Friday morning that he would not, as many had expected, run for president in 2016.

“After putting considerable thought into making another run for president,” Romney said in remarks first officially posted on Medium, “I’ve decided it is best to give other leaders in the Party the opportunity to become our next nominee.”

Bush is widely seen as the leading moderate presidential contender, and although many in Romney’s camp see Bush’s candidacy as a long shot, he is quickly locking down key personnel as he mulls a formal campaign. Romney would have been hard-pressed to match his early lead in courting major donors and top staffers.

Although the story of Romney’s announcement was that he had decided not to run, it began very differently this morning, when the Daily Beast reported that Romney was, in fact, running.

The publication got it wrong and said so shortly thereafter.

We got it wrong. Mitt Romney is not running for President. http://t.co/se9pQApY5X

In the brief window between the Daily Beast’s supposed exclusive and the revelation that it had erred, talk of Romney lit up the Internet.

Over 87K Tweets were sent mentioning Mitt Romney in a 2.5 hour period http://t.co/WEV1EQeHA4 via @TwitterReverb pic.twitter.com/HcTu71EdXk

Twitter hasn’t cared this much about Romney since his infamous 47 percent remarks—and may never care about him this much again.