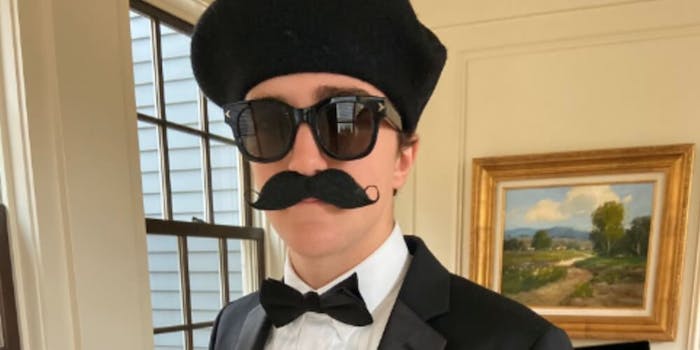 It’s that time of year again: when everyone dresses up as cats, vampires, and clowns–or like their grandpa’s secret Twitter account. This Halloween, Sen. Mitt Romney’s (R-Utah) grandson dressed up as his grandfather’s Twitter alter ego Pierre Delecto.

In early October, Romney got busted for lurking on Twitter with a secret account under the guise “Pierre Delecto.” Using the account, the senator said he stayed up to date on political conversations. And, of course, he liked tweets about himself, including from an account that imagines Romney as the future president.

Slate reporter Ashley Feinberg, who’s known for also uncovering former FBI Director James Comey’s secret Twitter account, started poking around for Romney’s account after he mentioned it in an Atlantic interview. The reporter found the account after looking through the Twitter followers on his family members’ accounts.

When Feinberg asked the senator to confirm her speculations, Romney reportedly answered, “C’est moi” (it’s me). Romney then made the Twitter account private, but not before reporters took a few screenshots. All of his 10 tweets were responses to other people, mostly about himself.

Thomas Romney, the senator’s grandson, used the Twitter account for costume inspiration, complete with a Pierre Delecto name tag. And for the most part, Twitter loves it.

Mitt Romney's grandson dressing up as his grandfather's twitter alter-ego is probably my favorite meta halloween costume of all time. https://t.co/HyWgqNx2QS

Nothing more 2019 than dressing up as Grandpa’s twitter name for Halloween. https://t.co/lcBE3c4gR0

Ok, this is pretty funny for a Romney. https://t.co/hCmiApOOB5

Somehow I thought Pierre Delecto would have a thinner mustache. https://t.co/mMZk5InCQy

Thomas may have a hard time beating this costume next year.