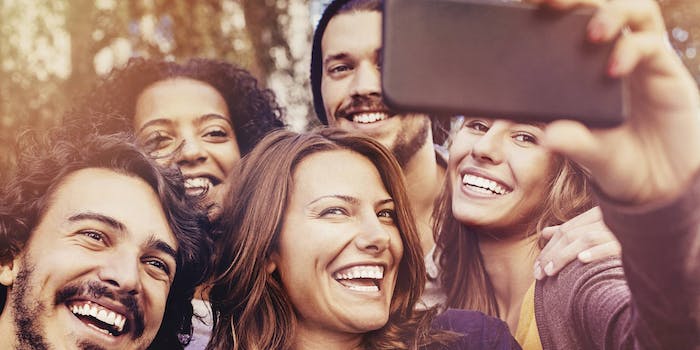 If there’s one thing everyone knows about millennials, it’s that they see the world through the Instagram filter of liberalism. America’s young adults lean left, right?

Well, the Millennial Impact Project—a study led by the Case Foundation looking at the political attitudes of people born between the years 1980 and 2000—found that assumption might not be entirely accurate.

Based on interviews with 1,050 millennials taken over a three-month span, researchers found 50 percent of millennials label their political ideology as conservative. Meanwhile, 43 percent labeled themselves as liberal and 7 percent said neutral or other. These findings contradict that widely held perception of millennials as generally progressive. 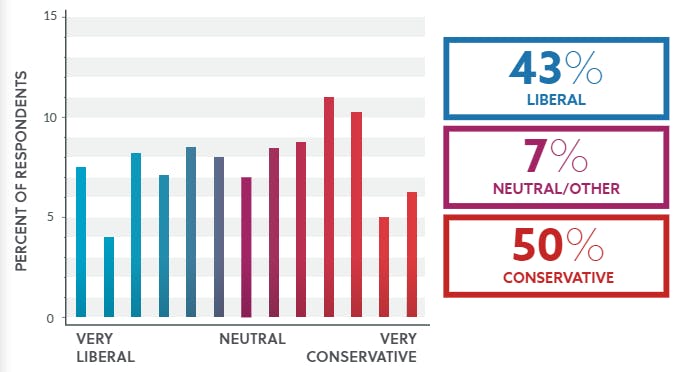 The question about political leaning was asked by presenting a sliding scale of one to 100 where respondents could place themselves with anything to the left of 50 being considered liberal and anything to the right of 50 considered conservative.

When broken down by gender, much like in the population as a whole, millennial men tended to be significantly more conservative than millennial women. 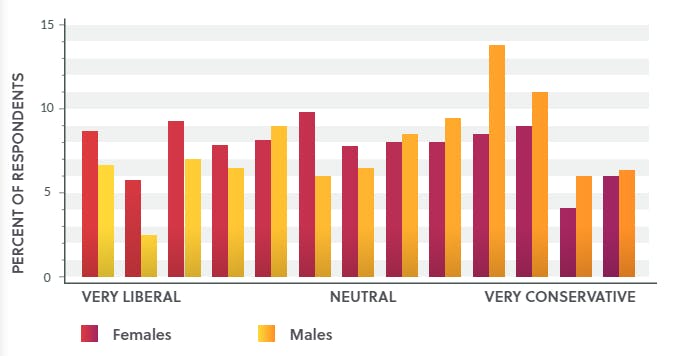 This report is only the first portion of an ongoing, multipart research project slated to run through the November election. The overarching goal is to test the researchers’ hypothesis that the 2016 presidential election will trigger a noticeable shift in millennials’ political views accompanied by an increase in social activism both online and offline.

“It has been a surprise to us that more millennials self-identified on the conservative side (albeit a fairly moderate conservative demarcation) of the scale as millennials are often seen as more liberal, but our data has provided the same conclusion for four months,” explained Achieve President Derrick Feldmann, who added that he hopes to get more insight into the phenomenon as the study continues.

These results seem to contradict other polls on the political orientation of millennials. For example, a 2015 Pew survey found 49 percent of millennials self-identified as liberal compared to 11 percent conservative and 38 percent moderate.

There’s long been an association between age and political outlook, with younger adults starting out progressive and becoming more conservative as they age. However, when Pew researchers took generational surveys of political attitudes in the mid-1990s, they found Gen Xers were more conservative than either Baby Boomers or members of the Greatest Generation.

Nevertheless, millennials in the survey were far more likely to support Democratic presumptive nominee Hillary Clinton than her presumptive Republican opponent, former reality TV star Donald Trump. In May, the last month in which the survey was taken, 37 percent of respondents supported Clinton and 20 percent supported Trump. Twenty-five percent said they supported Vermont Sen. Bernie Sanders, and the remaining 19 percent said they either had no preference or were not voting.

Even among millennials who identified themselves as conservative, Clinton still beat Trump 30 percent to 24 percent. Sanders garnered the support of 14 percent of millennial conservatives.

For liberals, Sanders was at 43 percent, Clinton at 33 percent, and Trump at eight percent.

Interestingly, the percentage of people saying they planned on voting in the November election dropped by 10 points between April and May, indicating there’s likely a small but growing group of young adults making the active decision not to participate in the political process.

It should be noted that, during that same time span, the percentage of respondents saying they support Clinton and Trump increased by seven percent and four percent, respectively.