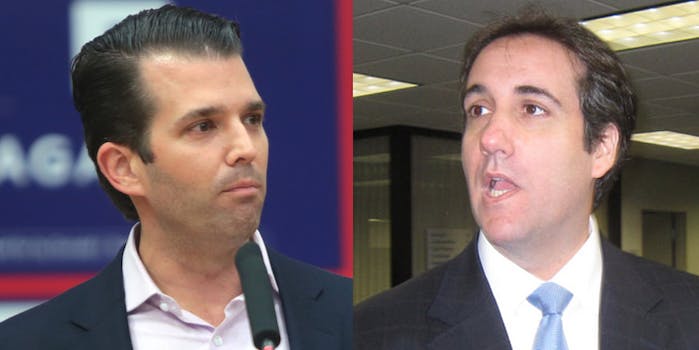 Cohen's having a rough few days.

Michael Cohen, President Donald Trump‘s long-time personal attorney, killed a story set to run in Us Weekly about an affair Donald Trump Jr. allegedly had with a contestant from Celebrity Apprentice, according to a new report.

Cohen, who was raided by the FBI last week, killed a story in 2013 that revolved around an alleged affair between Trump Jr. and Aubrey O’Day, who appeared on Trump’s NBC reality show, according to the Wall Street Journal.

Us Weekly reportedly had a “solid source” who told them about the affair and called the Trump Organization for comment. However, Cohen called the magazine back and threatened legal action, the Journal reports.

“We were all on speakerphone and huddled around the phone,” a source told the newspaper. “He was just one of these New York characters where he was just like swearing at us and totally over-the-top threatening.”

The magazine reportedly did not think the story was worth legal action and dropped it.

Trump Jr. appears to be the subject of a breakup song written by O’Day called “DTJ.”

It’s been a rocky few months for both Trump Jr. and Cohen.

As for Cohen, before his appearance in court today, it was revealed that he had three clients–one of which he could not disclose. Soon though, a judge ordered him to reveal the client, who turned out to be Sean Hannity.