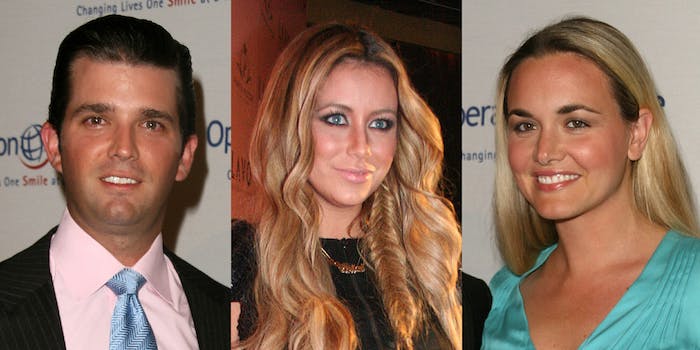 Danity Kane singer Aubrey O’Day reportedly had an affair with Donald Trump Jr. in 2011 after both crossed paths on Celebrity Apprentice. And she probably wrote an R&B song about it two years later.

Page Six reported on Monday that, at the time of the affair, Trump Jr. told wife Vanessa, whom he divorced last week, he was leaving her for the singer. Vanessa was apparently “devastated.” It didn’t take long after this news bit dropped for the internet to unearth O’Day’s 2013 nuance-free breakup song named “DTJ.” Is this the heartbreaking coda to their affair? Is “American Pie” about Buddy Holly?

“You want to believe that everything with me was a lie?” she asks on “DTJ.” (The song employs that handy pop trope of talking during the verses and then oscillating into a sung chorus. In that way, it’s like Nada Surf’s “Popular.”)

“The truth will only kill us both,” a man says.

“DTJ” was the side A, track 1 on O’Day’s debut solo EP, Between Two Evils. These days she’s one half of alt-pop duo Dumblonde, alongside fellow former Danity Kane member Shannon Bex.

Danity Kane, like Trump Jr.’s father, gained prominence on reality TV in 2005. The self-titled debut album went platinum, and the band broke up for good in 2014.

For his part, Trump Jr. sent flirty direct messages about bacon to a model while married to Vanessa, reportedly a month after Vanessa gave birth.