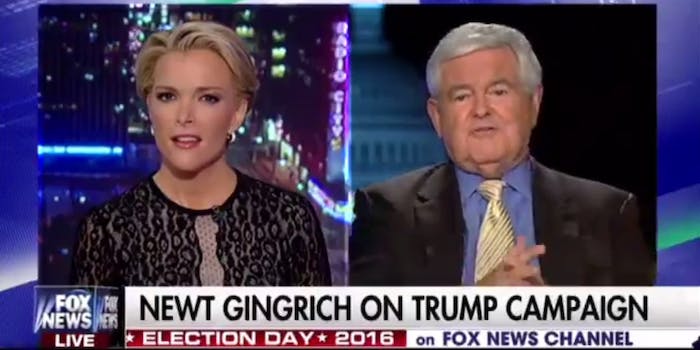 Only 13 more days of this, America.

The world of conservative talking points collapsed in on itself Tuesday night as former House Speaker Newt Gingrich accused Fox News host Megyn Kelly of being “fascinated with sex” for reporting on allegations that Donald Trump sexually assaulted multiple women.

After Kelly insisted Gingrich, a Trump surrogate, address the fact that the Republican presidential nominee is trailing in most polls, the conversation devolved into whether The Kelly File had given proper air time to allegations against former President Bill Clinton, husband of the Democratic nominee, Hillary Clinton.

Gingrich then questioned whether Clinton’s “secret” speech to a Brazilian bank in which she discussed a “dream” for “open trade and open borders,” for which she received $225,000, was worthy of coverage. Kelly agreed it was, but after she asserted that her viewers deserved to know whether Trump was a “sexual predator,” Gingrich flipped the script.

“I’m sick and tired of people like you using language that’s inflammatory that’s not true,” Gingrich said. “When you use the words, you took a position. And I think it’s very unfair of you to do that, Megyn!”

“Your defensiveness on this may speak volumes, sir,” Kelly responded.

After a bit of back and forth, this happened:

Gingrich: “You are fascinated with sex and you don’t care about public policy.”

Gingrich: “That’s what I get out of watching you tonight.”

Kelly: “You know what Mr. Speaker, I’m not fascinated by sex, but I am fascinated by the protection of women and understanding what we’re getting in the Oval Office and I think the American voters would like to know…”

Depending, perhaps, on your views about Trump and Clinton, this exchange could make either Gingrich or Kelly seem to have the upper hand. But it’s America that hangs in the balance.