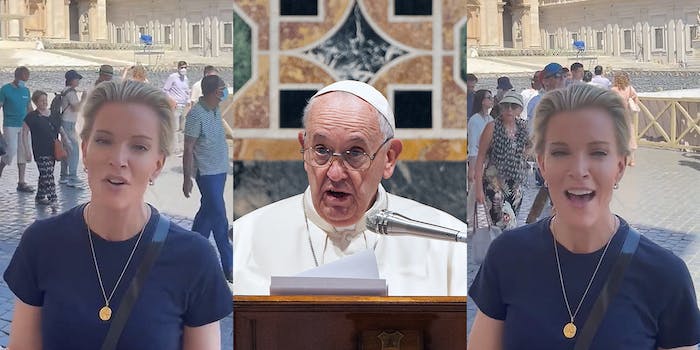 ‘Not unusual’: Even priests are dumping on Megyn Kelly’s big ‘scoop’ that the Pope may resign

'Wait, just got word that the Pope is Catholic.'

Megyn Kelly recently uncovered what could be the scoop of a career while touring Vatican City on her family vacation: Pope Francis may resign. Or it could be misguided speculation on her part. Experts, including priests and journalists who cover the Vatican, insist it’s the latter.

On Monday, Kelly tweeted a live shot captioned, “Unusual activity at the Vatican as reports break that Pope Francis may be about to resign. (And we are there!)”

“We just happened to be here on a family vacation when we just read that news broke about this pope, Pope Francis, possibly getting ready to resign. Unconfirmed but I’ll tell you inside the Vatican moments ago we saw a ton of Cardinals, which our guide tells us is highly unusual, they’re not used to seeing that. That’s not normal,” Kelly said excitedly.

“And moments earlier when we were in the Sistine Chapel, a priest or bishop, unclear, came in and gave us a blessing. Also highly unusual. What was he doing there? Why was he doing that? What did he know? But there’s a lot of buzz going on right here, so. News as we get it.”

Kelly’s report is based in part on a Daily Mail article she tweeted an hour earlier about the Pope postponing a trip to Africa and calling for a meeting of Cardinals in August.

As this meeting isn’t to be held for two months, the presence of a bunch of them during the Kelly family tour could indeed be unusual—except it probably isn’t.

The extra Cardinals are likely simply in town for the annual World Meeting of the Families on June 22-26. Vatican News reports that delegations from around the world will attend the meeting in the Vatican’s Paul VI Hall.

It is still possible that Pope Francis plans to resign, as he previously said he may do so if he became incapable of performing his papal duties. And it is also true that other outlets are reporting on the speculation that Pope may step down.

But, as reporter Ines San Martin pointed out, it’s not exactly out of the ordinary for there to be clergy at the Vatican, nor for them to be giving Mass and blessing visitors.

“It’s not even unusual she had a really bad tour guide who made things up,” tweeted San Martin, who covers the Vatican for Crux. “Knee pain is no reason for a person to quit their job. I would have quit mine in 2020.”

Others engaged in some good-natured ribbing of Kelly over her report.

“MEGYN KELLY: I’m reporting live here from the Vatican where something odd is happening. People spontaneously carrying little crosses and religious beads and some are even muttering what sounds vaguely like prayers. It’s unbelievable. Wait, just got word that the Pope is Catholic,” tweeted satirist Jeremy Newberger.

Many poked fun at her assumption that the presence of Cardinals is significant. “Like finding congressmen in the Capitol,” wrote one.

Another quipped, “I’m in my backyard and there are cardinals everywhere. Unbelievable!”

Several replied to her tweet with photos of other types of cardinals.

Even some clergy got in on the fun. “I mean… Kudos to you for getting your office to spring for a trip to Rome,” Priest Robert R. Ballecer SJ replied to Kelly’s tweet. “But I live here, and large groups of Cardinals/priests/nuns are not unusual.”