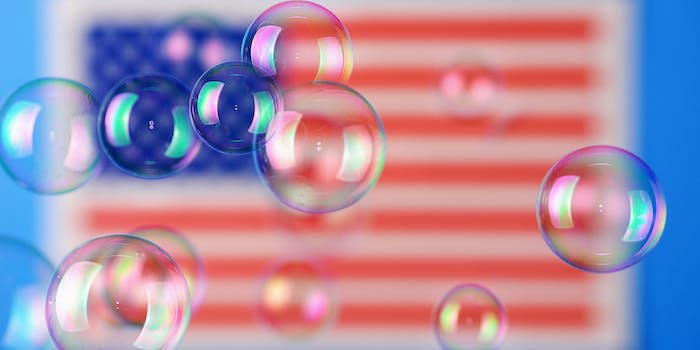 The media can only improve if we stop requiring journalists to live in major cities and expand into that sea of red America.

Stop me if you have heard this one before: American media has a problem, and it is only getting worse. But what if I told you that the media industry also has the solution and refuses to use it?

A report Politico released this week found that the “media bubble” is not just real—it’s expanding. An increasing number of media jobs are concentrating in cities—particularly in those along the East and West Coasts—just as local news outlets across the rest of the United States wither into husks of their former selves. According to the Bureau of Labor Statistics data Politico analyzed, internet publishing jobs have jumped more than 165 percent since January 2008 while the staffs of daily and weekly newspapers have fallen by almost half.

Despite the fact that a quality internet connection can be found in most populated areas of the U.S., these web-based jobs have congealed around urban areas that are predominantly liberal. “Nearly 90 percent of all internet publishing employees work in a county where [Hillary] Clinton won,” Politico’s Jack Schafer and Tucker Doherty report.

This inflating media bubble over liberal America has created two clear symptoms of a sickness within the Fourth Estate: The media’s overwhelming failure to adequately predict Donald Trump’s rise to the presidency and the proliferation of “fake news,” a sign of a professional media industry so weakened that this type of cancerous nonsense can metastasize in the gap between urban and rural America.

The urbanization of media coincides with a dismal view of the press in the United States. A July 2016 Pew study found that just 18 percent of Americans have “a lot” of trust in the national news media, with that number falling to 15 percent among Republicans and a 13 percent among independent voters. (It was higher but still poor among Democrats, at 27 percent.) It is in this context that fake news has proliferated: If the mainstream national media is missing stories and getting it wrong, of course people will seek out new sources of information, bogus as they may be.

For an industry that is explicitly protected by the Constitution and considers its role as a defender of democracy, this lack of trust is both embarrassing and dangerous.

Just as the internet has given rise to the sicknesses of fake news and media-bubble ignorance, it can also provide the best treatment. Internet publishers must shed themselves of the stale 20th-century idea that reporters and editors must slog into a traditional office every day and instead embrace remote workers, particularly those who live outside toxic media bubbles.

I have worked remotely as a reporter or editor for more than six years. Although I live just two hours north of New York City—by no means a bastion of conservative America—at least half of my neighbors had Trump-Pence signs in their yards. My friends in Brooklyn were baffled on Election Night, as Trump’s electoral victory became increasingly apparent. I can’t claim to have predicted the night’s outcome, but I at least put it in the realm of possibility in part because of conversations I had with the people who live just down the street.

The benefit of working for a publication that does not simply tolerate remote working but actively embraces it came into greater focus last month when a member of my family faced a medical emergency. First, because I work remotely every day, cranking on the news from a hospital waiting room for two weeks was little more than a change of scenery. My workflow was uninterrupted. The resources I need to do my job were all there, just as they always are. Second, I was able to return to my home region of southeast Ohio, a bellwether of Trump’s America and an area overwhelmed by the types of economic and social problems that you only read about in Washington or New York. The clear struggles I witnessed in small-town Ohio and West Virginia those two weeks tinted the lens through which I see the news today. That’s after just two weeks in a different area of the country. Imagine what a reporter with true local perspective could bring to the national conversation.

Of course, simply living in New York or San Francisco does not mean the cultures of those cities are the only elements influencing how a reporter approaches the news. As the Huffington Post’s Editor-in-Chief Lydia Polgreen recently wrote, “Like so many other industries, journalism has become highly concentrated in affluent urban centers. Yet I don’t buy the caricature that the national press is a bunch of clubby elites―many of us grew up in far-flung places with varied backgrounds.” That is true, but it is also true that the place where you live now shapes how you see the world. What I considered “normal” during the 10 years I lived in New York City has shifted in significant ways even though I moved just a short jaunt up the Hudson River.

It is also entirely incorrect to believe that media organizations are ignoring certain stories because of some “liberal agenda.” Journalists want scoops; they want to produce excellent, defining work—no matter what the political implications. That is what motivates us every day. I have yet to meet a journalist who would intentionally skip a good story because of their political affiliations or beliefs, let alone their enjoyment of organic foods and yoga. But where we live does amplify certain issues or ideas while blinding us to others, which leads to coverage bias—unintentional though it may be.

Talk of vague cultural and experiential influences aside, on a practical level, working from home is simply not that different than doing your job from those open-concept offices new media companies love. Most of your work is done through phone calls and text messages, email, Twitter, Facebook, and Slack regardless of your proximity to co-workers. Further, online publishing is inherently suited to remote working because its fast pace forces you to stay on task—you know if I haven’t done my job because either a story has been published or it hasn’t. And there’s always that telltale green dot next to my name in Slack.

You would think, then, that media companies would embrace remote working, but that does not appear to be the case. Data from FlexJobs, which focuses on telecommuting, shows that media companies are almost entirely absent from the top 100 U.S. companies offering work-from-home positions. From my own experience, publications remain hesitant to employ remote workers and require those who do to jump through hoops and, as a result, instill a feeling of perpetual guilt for not appearing in the office—even if they produce great work. A previous employer of mine, for example, paid hundreds of dollars a month for me to commute into Manhattan once a week simply so I could sit at a desk and do virtually the same work but with more distractions and better options for lunch.

That is not to say there are no upsides to both traditional offices and employing reporters who live in major cities. Working in a bustling newsroom is exciting and creates a sense of camaraderie, as does going out for post-work drinks. New York, Los Angeles, San Francisco, Washington—these are most likely where major events happen and where crucial sources live or work. The media needs to have ample resources in these areas. But the notion that journalists who live in cities are the only people worth employing is as flawed as predicting Hillary Clinton would become president.

As far as I can tell, employers’ reluctance to hire remote workers stems from two main areas. The first is practical: Businesses must incorporate in every state where they have full-time employees, which makes it more challenging to hire journalists from across the U.S. The other is simply an outdated sense of what a workplace must be. How else can you explain a Manhattan-based company giving me a hard time for living in a different part of New York state? Many others simply require you work from their offices.

The benefits to overcoming these challenges to remote working and biases against it clearly outweigh the alternative. Bursting the media bubbles of our own creation will expand our slate of good stories and improve our journalism. It will improve the shameful degree to which Americans trust the media and give suburban and rural communities a bigger voice and the opportunity to tap into good-paying jobs. Hey, it might even allow us to take seriously the next big political trend so we don’t get caught with our pants down—even if, you know, we aren’t actually wearing pants.