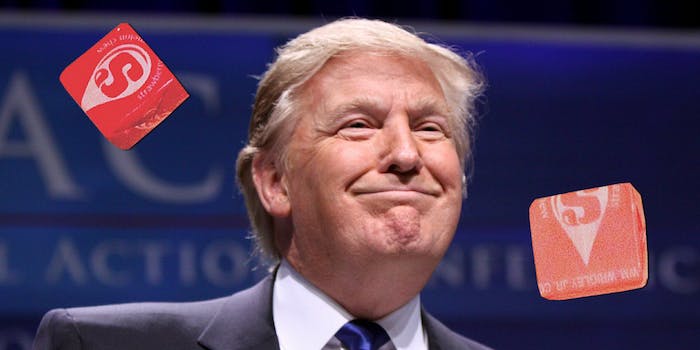 Only pink and red candies for the president.

Trump is known to have some bizarre eating habits, but McCarthy eyed Trump’s affinity for particular-flavored Starburst candies while riding Air Force One in October, the Washington Post reports, and used that newfound knowledge to curry favor with the president.

“We’re there, having a little dessert, and he offers me some,” McCarthy told the newspaper. “Just the red and the pink. A bit later, a couple of his aides saw me with those colors and told me, ‘Those are the president’s favorites.’”

McCarthy, known for his pursuit of political alliances, didn’t stop there. The Post reports that the majority leader had a member of his staff sift through a pile of Starbursts and pick out the red and pink candies that he would later give to the president as a gift.

McCarthy has been an ally for Trump early in his presidency, just recently correcting the president during a cabinet meeting regarding a deal for the Deferred Action For Childhood Arrivals (DACA) program.

When asked by Sen. Dianne Feinstein (D-CA) if a DACA deal could be separate from an immigration bill, McCarthy stepped in and corrected the president after the president suggested it could.

As for the candy, McCarthy was unabashed as to why he would gift the president his favorite flavors in a jar (with a clearly marked label, making sure he would know who they came from).

“He remembers everything,” McCarthy told the Post. “Of course I put my name on the jar.”