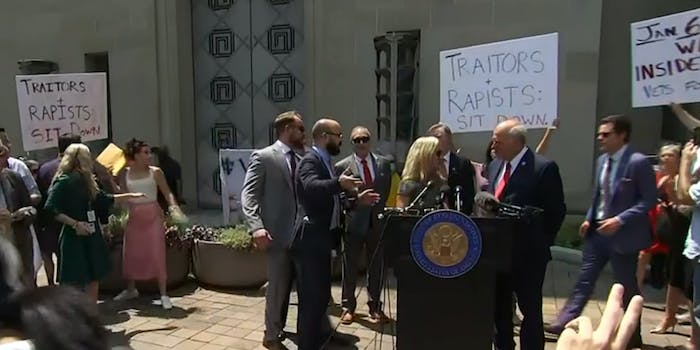 Protesters force Matt Gaetz, Marjorie Taylor Greene to hightail it from their own Capitol riot presser

The lawmakers were ushered away shortly after Greene said they would 'not back down.'

A press conference featuring Rep. Matt Gaetz (R-Fla.), Rep. Marjorie Taylor Greene (R-Ga.), and others was interrupted by protesters on Tuesday, causing the lawmakers to hastily end it and leave.

The House Republicans were joined by Rep. Louie Gohmert (R-Texas) and Rep. Paul Gosar (R-Ariz.) to talk about the treatment of those who were arrested for allegedly participating in the Capitol riot earlier this year. During the riot, Trump supporters stormed the Capitol and eventually made their way inside in an attempt to stop the results of the 2020 election from being certified.

The four lawmakers held the press conference outside of the Department of Justice. Video of the conference from C-SPAN shows that it was almost immediately interrupted by someone continuously blowing a whistle, making it difficult for Greene to deliver her remarks.

Later on, video shows people numerous signs near the lawmakers. Another protester had a large caricature of former President Donald Trump with a sign around its neck that read “Pedophiles for Trump.”

Greene eventually addressed the person who blew the whistle throughout the entire event saying that they were “not deterred” by it and that they would “not back down.”

About a minute after that, an aide came over to the group of lawmakers and said “we’ve got to go.” Gaetz and Greene can be seen on video being quickly ushered away from the event.

More video from the event shows the lawmakers ignoring numerous questions and walking quickly to cars.

Both Gaetz and Greene were photographed earlier this month with a woman who participated in the Capitol riot.