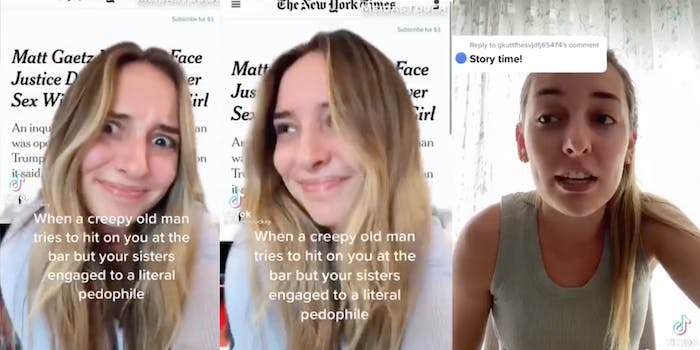 'When everything came out about him, I honestly, unfortunately, was not surprised.'

Rep. Matt Gaetz (R-Fla.), under investigation for sex trafficking charges and coming under scrutiny for past online behavior, is facing a new round of questions about his character via his future sister-in-law.

Roxanne Luckey, posting on her now-private TikTok account (@roxanneluckey), notably called Gaetz a “literal pedophile” in a video caption and recalled a confrontation over Thanksgiving in which she characterized Gaetz as “1000% gaslighting me” for calling her a “narcissist.”

While the videos are no longer publicly available on the platform, they live on via the @meidastouch Twitter account.

The video shared by MeidasTouch begins with a clip of Luckey reacting to news of Gaetz’s alleged improprieties earlier in 2021, with an on-screen caption reading, “When a creepy old man tries to hit on you at the bar but your sister’s engaged to a literal pedophile.”

Luckey begins by clarifying what she sees as Gaetz’s specific kink, introducing the term “ephebophilia,” which, as she reports, is the term for someone “attracted to post-pubescent teens in the age range of 15 to 18.”

She then details Gaetz’s attempts to set her up with a friend of his around Gaetz’s age, divorced and with a kid; she expresses concern about the age difference in the video, noting she “has personally experienced tons of creepy old politician men hitting on me when I was underage, and experiencing sexual assault at that age by people in power.”

“Matt told me I should ask you out,” she recalls Gaetz’s friend telling her. “We’d be great together.”

She then recounts confronting Gaetz at Thanksgiving over the attempted matchmaking and reports that he did not take that confrontation well.

“He just immediately got so defensive, started yelling at me and my mom,” she says in the video. “He called me a narcissist, which is 1000% gaslighting me. He went full lawyer on me, like, ‘I don’t have to listen to you, I don’t have to answer your questions.'”

She also had thoughts about the allegations she shared in the TikTok, noting, “When everything came out about him, I honestly, unfortunately, was not surprised. And it wasn’t just this encounter I had with Matt. When I was in D.C., I heard through the grapevine stuff about him. Everything is hearsay, but just, he had a reputation for prowling after college girls when he’s a grown man, and to me, that’s just kind of weird.”

A March 31 Daily Dot article noted that Gaetz’s online behavior was raising some eyebrows in light of the investigation details, including joking that Florida’s motto should be changed to “There’s no age that you can’t […] be sexy” and tweeting a photo of himself with a group of girls during a visit to a high school, terming his location a “good lunch table.”

According to a New York Post article, Ginger Luckey became engaged to Gaetz in December 2020 after meeting him nine months earlier at a fundraiser for then-President Donald Trump at his Mar-a-Lago resort. The article characterizes her as having been “dragged” to the event by her mother, but the subsequent courtship went well enough for her to accept his proposal at a holiday party—also at Mar-a-Lago.

The sisters have a famous sibling, Palmer Luckey, who founded Oculus VR and sold it to Facebook for $2 billion in 2014.

Roger Sollenberger, who reported on the story for the Daily Beast, tweeted that “When a TikTok user told Luckey she needed to get her sister out of the relationship with Gaetz, she replied: ‘He’s a narcissist and a master manipulator. She believes everything he tells her.'”

He also tweeted that when he reached Ginger Luckey for comment, “she attacked her sister’s mental health (!) and implied her sister was receiving ‘in-patient treatment,’ but did not actually make that claim. She also claimed to be estranged, but video suggests if that’s true, it’s a recent development.”