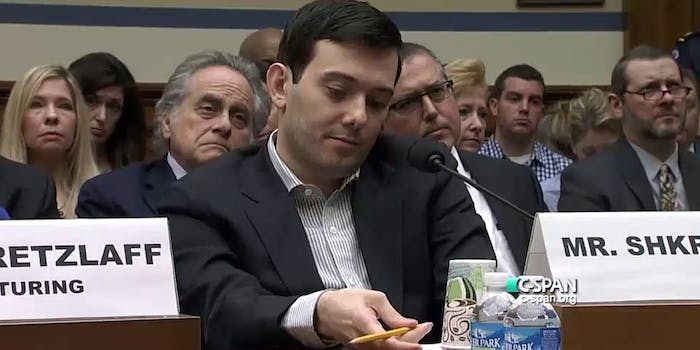 The most hated man in pharmaceuticals left the government hearing after mere minutes.

Many Americans angry at Turing Pharmaceuticals CEO and alleged price-gouger Martin Shkreli expected to see him chastened when he appeared before Congress on Thursday morning. Instead, Shkreli repeatedly dodged attempts by lawmakers to get him to admit wrongdoing in a drug-pricing controversy.

Lawmakers at the House Oversight Committee hearing hoped to scold Shkreli and other drug-company executives for excessively raising the prices of life-saving drugs. But instead of giving his detractors what they wanted, Shkreli pled the fifth, stared smugly at his congressional overseers, and then left.

In Shkreli’s place, Turing CCO Nancy Retzlaff remained at the hearing to face the committee’s wrath.

Shkreli earned public ire for founding Turing in February 2015 and quickly raising the price of a vital AIDS drug, Daraprim, from $13.5 per pill to $750. The 32-year-old executive, who was arrested in December in a separate securities-fraud case, has avoided admitting any wrongdoing and shrugged off attempts to shame him into apologizing.

As the hearing began, Shkreli and his attorney arrived and sat alongside Retzlaff; Janet Woodcock, director of the Food and Drug Administration’s drug-evaluation office, and Howard Schiller, CEO of drug-company Valeant Pharmaceuticals.

A flurry of reporters and news cameras captured Shkreli’s arrival.

Advocates for low-cost drugs and others frustrated with Shkreli’s actions seemed glued to the hearing during its opening moments, hoping for an admission of guilt. Even Democratic presidential candidate Bernie Sanders took time out of campaigning to tweet about the hearing.

Although Martin Shkreli’s greed is in the national spotlight today, skyrocketing drug prices are a daily struggle for many Americans.

The American people are fed up with the blatant profiteering of pharmaceutical company CEOs like Martin Shkreli. It must end.

But Shkreli almost immediately invoked his Fifth Amendment right not to incriminate himself. And as Rep. Elijah Cummings (D-Md.), the committee’s top Democrat, delivered his opening remarks, Shkreli repeatedly made mocking faces, which led Cummings to pause and ask him, “Are you listening?”

Cummings earnestly pleaded with Shkreli not to “go down in history as the poster boy for greedy drug-company executives,” and he noted Shkreli’s flippant looks by adding, “You’re smiling, but I’m very serious.”

"It's not funny, Mr. Shkreli. People are dying and they're getting sicker and sicker" #PeopleNotProfits pic.twitter.com/1sd5mGDhpF

Even as lawmakers spoke, Shkreli mocked them on Twitter and offered a cocky response to criticism of his facial gestures.

Shkreli did not appear to take the hearing seriously. Not only did he repeatedly smirk during his short appearance in the House chamber, but he also retweeted memes parodied his pleading the Fifth that compared him to a Dave Chapelle skit.

After Shkreli left, Retzlaff, the Turing CCO, took the brunt of the intense questioning. Lawmakers grilled her for two hours straight, as she shifted uncomfortably in her seat and tried to defend her boss’s policies.

Retzlaff tried to hold the Turing company line, saying repeatedly that the company had subsidized the exorbitant cost of Daraprim, that all profits went back into research and development, and that Turing was actually losing money on the drug.

“The most vulnerable toxoplasmosis patients can access our medication for a penny a pill,” she claimed during the hearing.

Challenges @TuringPharma’s claim $ from price-gouging going to research. Says: “I’d like to see that correlation”

“That ain’t true,” responded Chaffetz. He later referred to extensive financial documents showing that Turing didn’t put all of its Daraprim profits back into R&D.

Instead, he said, the documents showed that the money went to yacht rentals for parties, fireworks, a cigar roller, and massive six-figure salary increases for employees.

Chaffetz excoriated Retzlaff for her claims that Daraprim had cost Turing money. “You’re not losing money,” he said, “you’re making it hand over fist.”