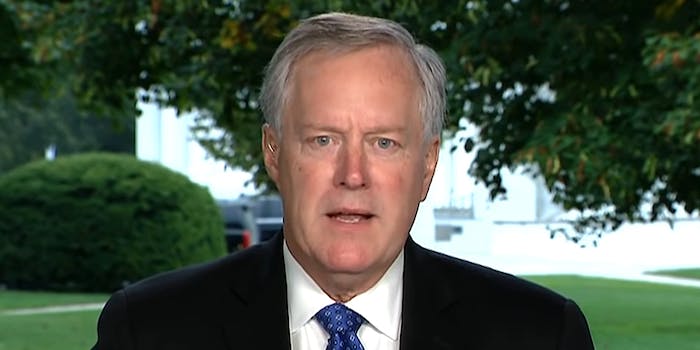 In a message on January 1, Mark Meadows, Trump’s chief of staff, shared a link to a YouTube video with then-acting Attorney General Jeffrey Rosen that falsely claimed Italian satellites manipulated the outcome of the 2020 presidential election.

Known online as #ItalyGate, the conspiracy theory alleged that an employee of an Italian defense, security, and aerospace company openly admitted to switching votes from Trump to then-candidate Joe Biden using satellites.

An investigation by Reuters, which included an interview with a lawyer for the employee, found that the claims were baseless.

The conspiracy theory is similar to numerous others, including one which falsely claimed that the U.S. Army invaded Germany to bring down a CIA-run server designed to steal the election from Trump.

Meadows even went as far as to attempt to have Rosen set up a meeting between the FBI and an ally of Trump’s personal lawyer Rudy Giuliani to further investigate the Italian satellite claim.

Rosen would go on to shoot down the offer, recounting his refusal in an email to DOJ official Richard Donoghue.

“I flatly refused, said I would not be giving any special treatment to Giuliani or any of his ‘witnesses,’ and re-affirmed yet again that I will not talk to Giuliani about any of this,” Rosen wrote.

After Rosen shared the YouTube link regarding the conspiracy theory with Donoghue, the DOJ official responded by simply describing it as “Pure insanity.”

The email is just one of several directed at Rosen by members of Trump’s inner circle. Rosen was repeatedly asked to investigate a wide range of election fraud claims in the wake of Trump’s loss to Biden.