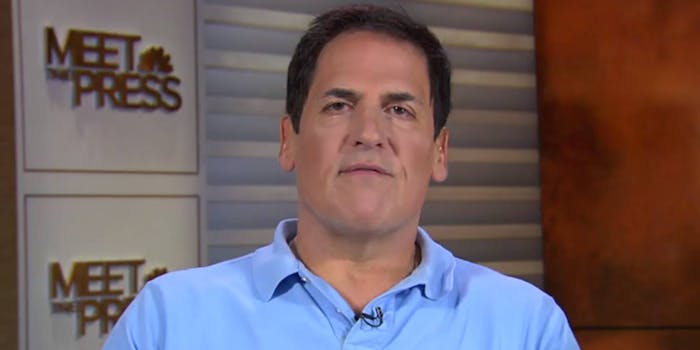 'There's a lot of divisiveness and a lot of uncertainty and that's not necessarily a good thing.'

Mark Cuban is ready to join a political ticket. It doesn’t even matter the party.

In an interview on NBC’s Meet the Press that aired on Sunday, the businessman praised the Donald for appearing to pave the way for outsider candidates with diverse backgrounds to enter politics. “You don’t have to be the perfect Stepford candidate like you would’ve in the past,” Cuban said.

Were Cuban to be tapped by Trump, he’d want a full dialog on major issues that delve deeper than the presumptive nominee’s slapdash talking points and catchphrases. With Clinton, on the other hand, Cuban would want far more than a simple discussion.

“The key would be that she’d have to go more to center.”

Cuban’s call for a more centrist approach from Clinton came in the same interview where he praised Obamacare and decried Vermont Sen. Bernie Sanders’ call for eliminating college tuitions for students.

This led host Chuck Todd to speculate on Cuban’s political leanings, questioning if he’d be interested in running as a Libertarian. The billionaire businessman’s name had been floated around as a potential presidential candidate himself. When pressed by Todd as to whether he would consider jumping into the race, Cuban made it clear that it was far too late for him to have a chance. Instead, his sights are set on the vice presidency.

Clinton also appeared on Meet the Press and appeared to echo some of Cuban’s statements about the changing nature of political candidacy. “It’s not just people in elective office,” the former secretary of state said when pressed about picking Cuban as a running mate. “It is successful businesspeople. I am very interested in that. And I appreciate his openness to it.”