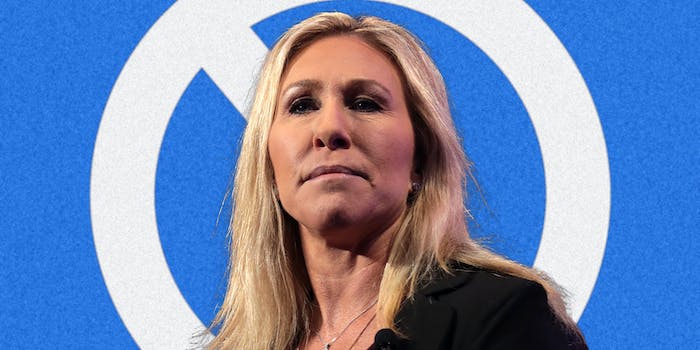 The temporary suspension comes a day after Twitter permanently banned her.

Rep. Marjorie Taylor Greene (R-Ga.) claims that Facebook has temporarily suspended her account. The move from the social media giant comes shortly after Twitter permanently banned one of her accounts for “repeated” violations of its misinformation policy.

Greene shared the update on her Gab profile on Monday morning, accusing the social media platforms of “censoring” her.

“This is beyond censorship of speech,” she wrote in the post that has since been viewed by a few hundred people. She has more than 337,000 followers on the platform.

She shared a screenshot of the post that reportedly got her banned.

“After 2020, we crossed into a new time dating method. BC and AC,” the post said. “Before Covid. After Covid. We are moving into the third year AC.”

“This post goes against our standards on misinformation that could cause physical harm, so only people who manage Marjorie Taylor Greene can see it,” read a part of the notice, according to the screenshot attached to her Gab post.

However, her page, with more than 400,000 followers, is still accessible on the Facebook platform and people are still able to engage with her posts.

The post in question was not available on her page at the time of reporting. It is not clear if she deleted it or if it was removed by the platform.

The Daily Dot has reached out to Facebook for further comments.

Update 3:15pm: In a statement provided to the Daily Dot, Facebook said: “A post violated our policies and we have removed it; but removing her account for this violation is beyond the scope of our policies.”