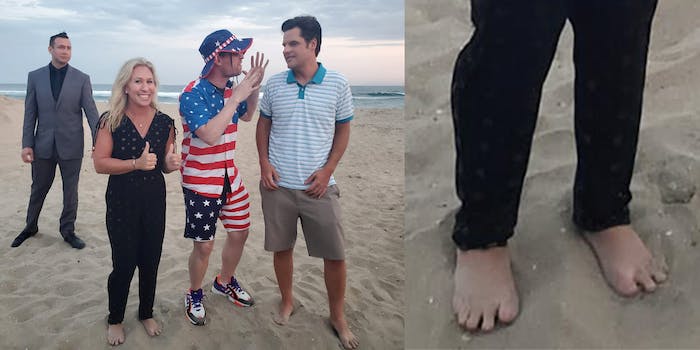 If the cardinal rule of being a politician on the internet is to be authentic, a second, probably even more important tenet is this: Don’t share shots of feet on main.

The internet is rife with horndogs, and perhaps none are more vigilant than those frisking the photos of the famous to find feet.

This weekend, Rep. Marjorie Taylor Greene (R-Ga.), most famous for riling up Twitter users with her conspiratorial claims, found another subset of the internet to set aflame.

Greene was traipsing around a beach in Southern California with Rep. Matt Gaetz (R-Fla.), a state neither of them represents, as part of their America First tour.

And the images from the event left people speculating that something was… afoot.

It certainly seems like she’s missing a toe or two, although the quality of the images is lacking. Maybe she has 10 toes, maybe she does not. It’s possible she has a hammertoe or two, and the way she’s standing in the images obscure her pinky toes on both feet.

But it wasn’t only a stir on Twitter, the pictures also made their way over to WikiFeet, the site dedicated to sharing, rating, and discussing the feet of anyone even tangentially famous.

There, Greene’s overall rating is three out of five stars. Users also speculated about the overall number of toes contained on her feet, although you’d expect them to be more knowledgeable about the situation and provide insight.

Given, though, that the most recent photos were just uploaded there on Sunday, it’s possible her rating could be lower by the end of the day and commentators could fill in the gaps.

We will continue monitoring.