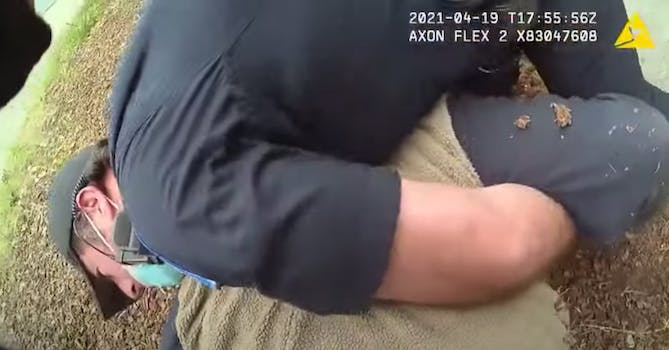 The video is strikingly similar to the death of George Floyd.

Body camera footage shows California police pinning a man face down for five minutes before he died, in a fashion disturbingly similar to the death of George Floyd.

Mario Gonzalez died on April 19 just one day before Derek Chauvin, the Minnesota police officer who killed Floyd last May, was convicted of murder. Three Alameda police officers arrested and restrained Gonzalez in a similar fashion, as seen in footage released on Tuesday. It shows Gonzalez resisting arrest before becoming unresponsive after several minutes.

Editor’s note: The contents of the video are triggering; please watch with caution.

Police were first called because Gonzalez was sitting on a person’s fence talking to himself, appearing to be unwell. The person who called 911 says, “he’s not doing anything wrong.”

Then, another neighbor called police after spotting Gonzalez drinking in the park with what appeared to be stolen bottles.

The three officers involved were Eric McKinley, Cameron Leahy, and James Fisher. They are now on administrative leave.

After struggling to obtain information from Gonzalez including his name and home address, the police officers forced him onto his stomach, pinning him down for around five minutes.

As time goes by, Gonzalez went from speaking incoherently with the officers to short bursts of yelling and whimpering and finally ceasing to respond. Just before they realized his condition, one officer reminded the other not to put weight on his chest.

Gonzalez stopped responded for almost a minute before the officers turned him over to administer CPR. The emergency medical team that arrived later administered Narcan, which is used to reverse overdoses.

Alameda police initially reported that “a physical altercation ensued” and that Gonzalez had later died in the hospital. That draws another similarity to Floyd’s death, as police used the same verbiage in their initial report on Floyd’s death.

The lawyer representing Gonzalez’s family called the report “misinformation,” according to the New York Times, noting the evidence in the body camera footage.