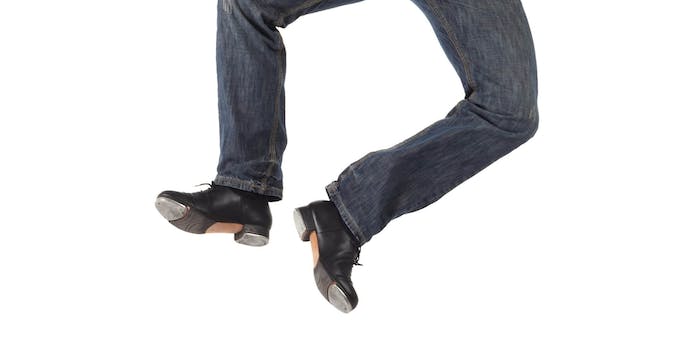 He plans to dance at midnight.

A man promised to tap-dance over his downstairs MAGA neighbor in exchange for Venmo donations. He received $10,000 and is now planning to give it all away.

Jett Croisant lives in a downtown Cleveland apartment above a person, who shows off their support for President Donald Trump through window signs: One is a Trump 2020 campaign sign, and the other features an illustration of Trump holding a gun. In response, Croisant put up his own window sign.

“VENMO @JET513 AND I WILL TAPDANCE AT MIDNIGHT,” it reads.

Amy Ziemak was the first to post a photo of the window feud to Twitter. “I’ve seen this person’s trump window posters for a while now. Completely unrelated, help support his upstairs neighbor’s tap dancing career. Fund the arts,” Ziemak tweeted on June 10.

The photo went viral, leading Croisant’s Venmo to be flooded with donations. He ended up with $10,000 in donations and even tap shoes that someone sent him, he revealed to BuzzFeed News.

“Every two to three seconds, I was getting Venmo’d money. It didn’t slow down until Friday. Today it’s picked up again, and donations are starting to get bigger. The biggest donation I’ve gotten is $50 a couple of times,” he told the outlet.

He put the sign up as a joke and had no ill-intent. “We’re teasing,” he told BuzzFeed News. He said that he’s never even met the neighbor in question.

“A couple months ago they put up the banners in the window, and it was the dumbest banners ever. It frustrated me a lot,” he said. “When we had the protest in Cleveland, that night they took it down. A couple nights later, they put it back up. It didn’t make me too happy…so I thought it would be a kind of funny to do to annoy them.”

He added that he plans to donate the money to the American Civil Liberties Union (ACLU). “I thought I should probably do something good with the money,” he told BuzzFeed News. He also plans to follow-through on his tap-dancing promise, which he is going to film so that those who have contributed can watch.