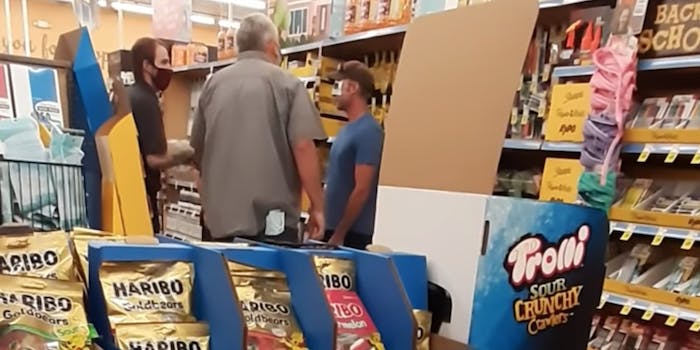 'I was surprised to hear that type of abusive language and threats being thrown out...'

A man in Utah was captured on camera arguing with grocery store workers after being confronted for wearing a face mask over his eyes.

Footage of the incident, which was uploaded to YouTube last month, shows the man arguing with employees at a Smith’s grocery store in Cedar City.

The man is first asked why he isn’t wearing a mask as outlined on numerous signs throughout the store.

When a female employee informs him that he is not wearing the mask correctly, the man replies by asserting that the signs don’t say that masks must be worn “properly.”

“We’re doing our job, what our corporation wants us to do,” the employee says.

The man adds that he chose to wear his mask in “superhero” fashion, as noted by local media outlet Fox 13 Now, by cutting out eye holes.

“You’re doing it just to be a jerk, we all know this, and so do you, so cooperate,” the employee says.

Growing tired of the man’s antics, a male employee eventually demands that the customer leave the store.

“Why don’t you get a fucking job and get out!” the second employee says.

The employee also refers to the man as a “Trumpster” and later a “redneck” before asking him to leave once again.

The man responds by stating that he is “in America” before the situation escalates even further.

“You’re not American, you’re being a piece of shit right now,” the male employee says.

The individual who captured the tense moment on tape, who asked to remain anonymous, told Fox 13 Now that he was startled by the employees’ language.

It also appears that threats were exchanged between the employees and the customer as well.

“I was shocked, because I know most of the people there in the video, except for the guy in the mask, and I have for many, many years,” he said. “I was surprised to hear that type of abusive language and threats being thrown out by them.”

While being escorted out of the store, the man ended the encounter by making sheep noises at the employees.

The company later said in a statement that it had been made aware of the incident.

“At Smith’s the safety of our customers and associates remains our top priority. While we do request all customers to wear a facial covering to help mitigate the spread of COVID-19, we were disappointed in the manner this incident was handled as it does not reflect our values or standards of service and have addressed the associates involved,” the statement reads.

Smith’s added that the employees involved “were re-trained on de-escalation and expected customer service.”

The customer was not arrested as he had vacated the store by the time police arrived on scene.