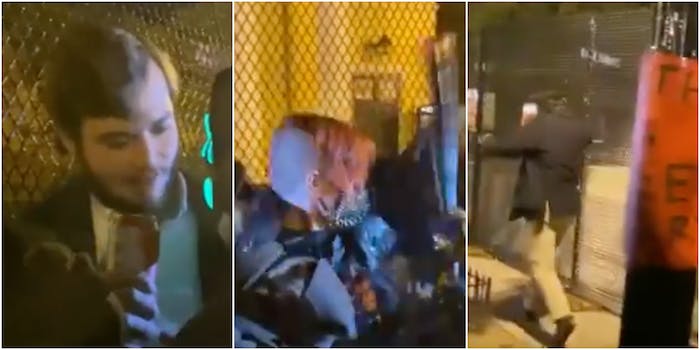 The man could be heard saying 'white lives matter.'

A video from election night shows protesters attacking a man with a baseball bat near the White House for saying “white lives matter.”

The caption for his Instagram post read: “Man attacked with bat on Election Night at Black Lives Matter Plaza… Protests turned violent outside the White House tonight as a man was attacked with a bat in Black Lives Matter Plaza. While most demonstrations have been peaceful throughout the evening, a few fights and scuffles have broken out as people clash on this highly contentious Election Night in America.”

The video starts near the fencing around the White House, with a man with an American flag bandana on his face, trying to ease tensions with a man in a lit-up mask.

However, the unmasked man behind him states to the masked aggressor: “white lives matter.” A short melee ensues, with the man throwing punches and his Coke back into one of the masked faces. Suddenly, a baseball bat came out and landed on his head, which virtually ended the altercation.

He eventually got up and left, dazed, with no one defending him.

The small group of masked protesters was also caught on video earlier, wearing riot gear similar to the Purge films.

As of Wednesday morning, there were no arrests made known to the public. The presidential election itself remains undecided, pending thousands of votes across numerous states.