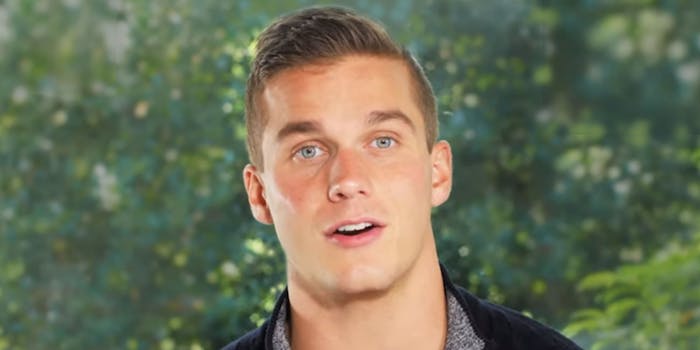 ‘Maybe he should cut out the trans bashing’: Madison Cawthorn called out for hypocrisy after photos surface of him in ‘women’s lingerie’

'I do care that Madison Cawthorn attacks trans people and shames us for living our lives.'

Madison Cawthorn is under fire on Twitter over recently surfaced photos that show him wearing “women’s lingerie” in what appears to be a party setting.

The Republican congressman from North Carolina is known for his staunch opposition to transgender rights. Now, he’s being called a “hypocrite” because of the photos.

Politico obtained and published the photos in an exclusive report Friday. Cawthorn has “staked his political persona on arch-traditional Christian principles and the insistence of the importance of a kind of hypermasculinity,” according to Politico.

On April 5, Cawthorn made an anti-trans speech on the floor of the House of Representatives, according to an article by Fox 8. The politician reportedly said “science isn’t Burger King” and gave an 80-second speech about his definition of what a woman is.

Now that the photos have been widely circulated, people have varying takes on what they mean and what they say about the politician. Several Twitter users agree that they wouldn’t care if Cawthorn wears feminine lingerie if he’d stop the “trans bashing.”

“Hey, if he likes women’s lingerie that’s cool, but maybe he should cut out the trans bashing,” one Twitter user tweeted.

Former state Rep. Charles Booker (D-Ky.), wrote on Twitter, “I don’t care that Madison Cawthorn wore lingerie. I care that that he and the rest of his colleagues are demonizing LGBTQ kids on a daily basis.”

Some Twitter users cautioned others to be sensitive about how they discuss the photos of Cawthorn.

“You can discuss the Madison Cawthorn photos while not engaging in the same homophobia and transphobia that he’s so well known for,” Rep. Malcolm Kenyatta (D-Penn.) tweeted.

After Politico published the photos, Cawthorn tweeted, “I guess the left thinks goofy vacation photos during a game on a cruise (taken waaay before I ran for Congress) is going to somehow hurt me? They’re running out of things to throw at me…” He also encouraged his followers to reply with their “most embarrassing vacay pics.”

Four days before Politico published the photos, Cawthorn tweeted, “There’s only one God and two genders. Get back to common sense!”

Journalist Aaron Rupar quote-tweeted that tweet Friday and said, “It’s not the photos. It’s the hypocrisy.”

Doubling down on his political stance, Cawthorn quote-tweeted Rupar and said, “My gender didn’t change when I put that stuff on. And neither does anyone else’s.”

The Daily Dot reached out to Cawthorn via email.