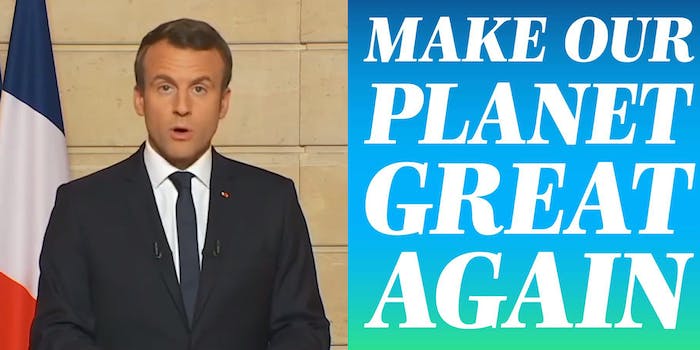 The newly-elected French leader issued a statement following the announcement, calling Trump’s decision a “mistake both for the U.S. and for our planet.”

Macron also invited scientists, engineers, and other people concerned about one of the largest greenhouse gas emitting countries pulling out of the landmark agreement to work in France.

“I call on them, come and work here with us to work together on concrete solutions for our climate, our environment,” he said. “I can assure you, France will not give up the fight.”

But Macron ended the statement with a clear not-so-subtle dig at Trump:

“Wherever we live, whoever we are, we all share the same responsibility: make our planet great again,” Macron said, evoking Trump’s borrowed tagline.

An hour after Macron’s statement was posted on his Facebook page and Twitter, a new blue-and-green “Make Our Planet Great Again” picture was posted—gaining more than 100,000 likes and more than 26,000 shares.

Trump’s decision to back out of the Paris Climate Accord was met with animosity among several world leaders.

Meanwhile, German Chancellor Angela Merkel, Italian Prime Minister Paolo Gentiloni, and Macron issued a joint statement that read as a direct response to Trump’s willingness to reenter the agreement on terms that he found more favorable.

“We deem the momentum generated in Paris in December 2015 irreversible and we firmly believe that the Paris Agreement cannot be renegotiated since it is a vital instrument for our planet, societies, and economies,” the statement read.

Merkel’s spokesperson wrote that she was “disappointed” in Trump’s decision, adding, “Now more than ever we will work for global climate policies that save our planet.”

The Weather Channel also trolled Trump’s decision, dedicating a majority of its homepage to stories offering proof that man-made climate change is real at the same time Trump was making his announcement.