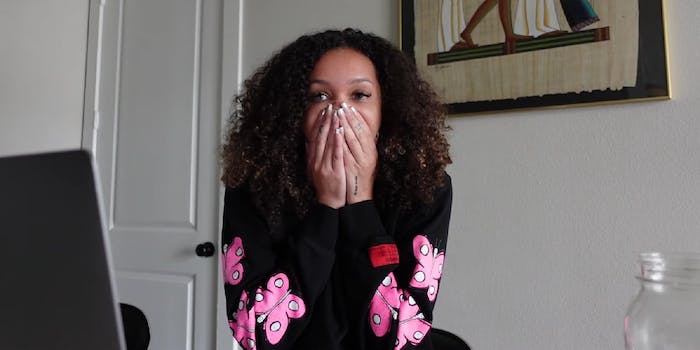 'My work environment is really toxic...'

A popular vlogger filmed herself quitting her job at Amazon in a dramatic video uploaded to YouTube on Wednesday.

Lynette Adkins, an influencer with close to 80,000 subscribers, announced that she had recently quit her position with Amazon Web Services over what she described as an unhealthy work environment.

The footage chronicles Adkins weeks-long journey in which she outlines the downsides of the job before finally deciding to leave the employer for good.

Adkins further stated that her team was placed under significant stress, with members reportedly working until midnight on a regular basis.

“I’ll get emails at 1 or 2 in the morning,” she added. “I don’t understand how people live like this and normalize this.”

Aside from the hours, Adkins said the primary issue stemmed from her feelings towards the ethics of working for Amazon. Adkins position involved marketing the company’s technology, such as its facial recognition software, towards law enforcement, courts, and prisons.

“I have 100 percent become complacent with this job and I’ve gotten way too comfortable with the amount of money that I’m getting paid and that’s really what it comes down to,” she said. “I’m scared to be broke. I’m scared to not be making as much money as I’m making from this job. Im making really good fucking money.”

Adkins noted that she second-guessed her feeling for weeks after filming her initial complaints. But in the end, Adkins decided that the salary was not worth compromising her morality.

After drafting her resignation email, Adkins shows herself hitting send.

“I just quit my fucking job,” she says while pacing by her computer.

A week after quitting, Adkins reiterated her plans to focus on content creation full-time and grow her YouTube channel.

“This journey of me working for myself is going to be an amazing journey and I feel more confident than ever in my decision,” she says.