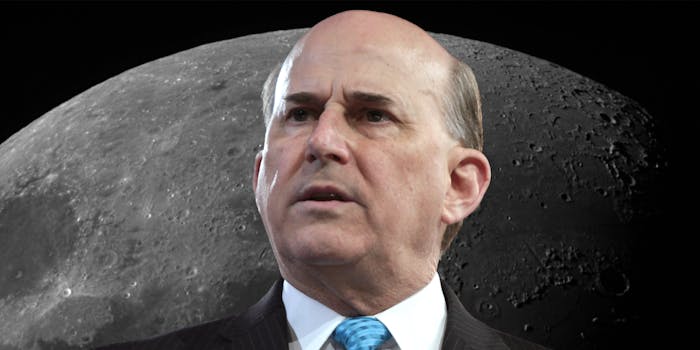 During Tuesday’s congressional subcommittee hearing on national parks, forests, and public lands, Rep. Louie Gohmert (R-Texas) asked a question that was out of this world.

“Is there anything that the National Forest Service or BLM [Bureau of Land Management] can do to change the course of the moon’s orbit or the Earth’s orbit?” Gohmert asked. “Obviously that would have profound effects on our climate.”

“I would have to follow up with you on that one, Mr. Gohmert,” Jennifer Eberlien, associate deputy chief of the National Forest System, replied, chuckling.

“Yeah, well if you figure out a way that you and the Forest Service can make that change, I’d like to know,” Gohmert said, then mercifully moved onto more serious matters.

Louie Gohmert was apparently trying, albeit clumsily, to imply that climate change was caused by the orbit of the two, rather than, as climate scientists overwhelmingly agree, by carbon emissions, deforestation, and other human activities.

It’s a nonsensical, unserious argument. And Twitter took Gohmert to task for it after Forbes posted the clip.

Many were reminded of the time a certain Republican president reportedly asked about nuking hurricanes. Others jokingly suggested using Jewish space lasers. A few were deeply concerned that Gohmert used to be a judge.

“There’s been some chatter lately about Louie maybe not being the dumbest member of Congress. It’s good to see he’s still in the fight,” one person said.

It didn’t take long before the memes started rolling in with an intensity not seen since Gohmert’s Uranium One chart.

The National Forest Service does not as yet have any plans to alter the Earth’s orbit. Or the moon’s.