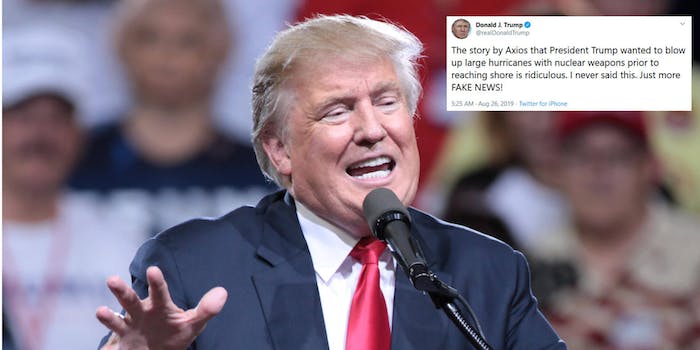 Trump says he never floated the idea of nuking hurricanes

President Donald Trump denied a report on Monday that said he suggested, and asked advisers about, using nuclear bombs to stop hurricanes.

Axios reported on Sunday—citing sources who were briefed on National Security Council memos that recorded Trump’s suggestions and who heard his remarks—that the president asked about dropping bombs inside the eye of a hurricane as it was forming in the Atlantic Ocean.

Here’s how Axios described it:

During one hurricane briefing at the White House, Trump said, ‘I got it. I got it. Why don’t we nuke them?’ according to one source who was there. ‘They start forming off the coast of Africa, as they’re moving across the Atlantic, we drop a bomb inside the eye of the hurricane and it disrupts it. Why can’t we do that?’ the source added, paraphrasing the president’s remarks.

The news outlet noted that the bombing hurricanes idea didn’t go anywhere within the administration.

On Monday, Trump pushed back at the report in an early morning tweet, saying it was “ridiculous.”

“The story by Axios that President Trump wanted to blow up large hurricanes with nuclear weapons prior to reaching shore is ridiculous. I never said this. Just more FAKE NEWS!” Trump tweeted.

The story by Axios that President Trump wanted to blow up large hurricanes with nuclear weapons prior to reaching shore is ridiculous. I never said this. Just more FAKE NEWS!

As BBC notes, the National Oceanic and Atmospheric Administration (NOAA) has the idea of nuking hurricanes listed as a frequently asked question on its website—adding that it is “not a good idea.”

Bombing hurricanes has been brought up in the past, according to the Washington Post.