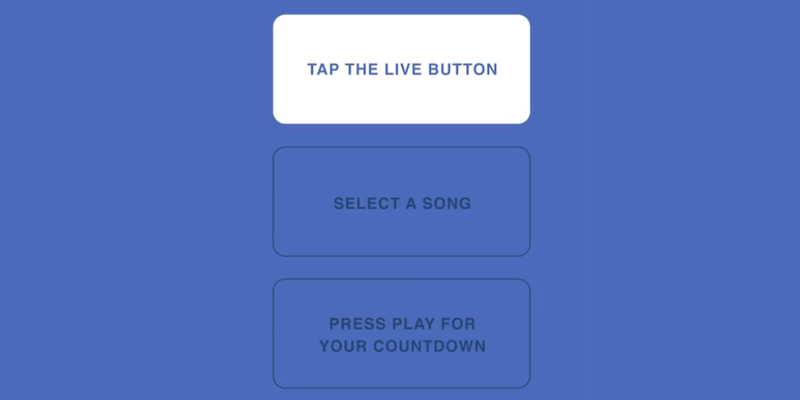 It's a move to get Musical.ly-loving teens back on the platform.

Facebook is rolling out a new feature designed to capture the delight of today’s teens. It capitalizes on one of their favorite pastimes: lip syncing. Lip Sync Live is a new addition to Facebook Live that lets users lip sync over songs.

Facebook’s take is an option in Facebook Live Video: You can select a song from Facebook’s current library of tunes, write a brief description for your video, and then start lip syncing. Facebook has hundreds of songs currently available but will be adding to that collection over time. Current hits include titles by Drake, Ed Sheeran, Camilla Cabero, and Guns N’ Roses.

While you lip sync, the artist name and song title will be visible to viewers, who can then click the artist’s name to follow their page. And if you don’t want to “sing” by yourself, you can use Facebook’s “Live with” option to have a friend join you.

Lip Sync Live is certainly a nod to Musical.ly, a lip-syncing recording and sharing app that’s popular primarily with teens. Facebook is continuing to deal with the issue of teens preferring other social media platforms over its own. A recently published Pew Internet survey found that only 51 percent of teens use Facebook, preferring YouTube, Instagram, and Snapchat (in that order) over the social network. (35 percent say they use Snapchat most often, while only 10 percent say they use Facebook most). That’s problematic for Facebook’s future, which will depend on growth from younger users to remain a leader in the social media space.

With Facebook Live and Facebook Messenger, the company has tried to tap into many of the features that have made its competitor Snapchat a popular alternative. Whether it’s because their parents are on it, the network is littered with ads, or they simply prefer the look and feel of other apps, Facebook is still losing ground with teens.

Still, lip sync videos are a commonly shared type of video these days. Whether the kids pick up on it or not, Lip Sync Live is bound to keep some Facebook users lingering on the site for longer.