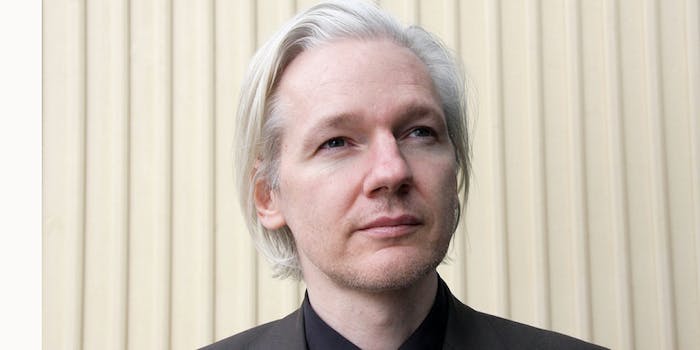 'We believe it would be much better for GOP to win.'

The Intercept published the messages in which the user behind the official WikiLeaks account, which the Intercept identify as the organization’s founder, Julian Assange, described Clinton as “a bright, well connected, sadistic sociopath.”

“We believe it would be much better for GOP to win,” Assange wrote in a direct message that was sent to a group chat. “Dems+Media+liberals would then form a block to reign [sic] in their worst qualities. With Hillary in charge, GOP will be pushing for her worst qualities., dems+media+neoliberals will be mute.”

Clinton’s presidential campaign took serious damage from WikiLeaks’ release of emails from John Podesta and Democratic National Committee, which were published in weekly batches the month before Election Day.

In the exchanges, Assange does not express political sympathy with conservatives but, rather, reasons that a Republican president will face more opposition to an interventionist foreign policy than Clinton, who he claims had the “will” and would have a “greater freedom to start wars.”

Assange also writes about his fear of a “whitehouse with [Clinton’s] bloodlutt and amitions [sic] of empire with hawkish liberal-interventionist appointees like [Anne-Marie] Slaughter and digital expansionists such as Google integrated into the power structure. Then the republicans and trump in opposition constantly saying she’s weak and not invading enough.”

Journalists at the Intercept claim that they obtained the chat logs from a former WikiLeaks supporter who was part of the “low-security channel.”  The archive of over 11,000 messages begins in May 2015 and ends in November 2017.

In other excerpts, the publication points to the strategizing for organized trolling campaigns that took place in the group chat. Assange, the Intercept reports, tells participants to “be the troll you want to see in the world” before explaining how to create fake accounts and suggesting, on a different occasion, they harass a named journalist.

Assange is living in the refuge of the Ecuadorian embassy in London, where he fled to avoid being extradited to Sweden in 2012. On Tuesday, a British judge rejected his legal bid to have his U.K. arrest warrant dropped.

Senior District Judge Emma Arbuthnot told the packed courtroom that it was still in the public interest to pursue Assange, who had skipped bail, and rejected the 2016 finding of a United Nations human rights working group that Assange was a victim of arbitrary detention.

Update 8:00am CT, Feb. 15: WikiLeaks founder Julian Assange responded to the Intercept article late Wednesday via his personal Twitter account. Assange wrote that the Wikileaks official account, cited in the report, is managed by “rotating staff” and not just him—as asserted throughout. He pointed to the fact that some of the direct messages quoted in the article were sent while his internet access was cut off in October 2016.

Assange continued that there are many groups like this filled with supporters and “freewheeling banter” that “do not represent editorial policy.” Assange then confirmed that this particular group chat was “not set up by WikiLeaks” and that the organization “cannot confirm any Twitter supporter group messages.”

Assange also tweeted that WikiLeaks had not been contacted by the authors of the article and criticized the publication for allowing journalist Micah Lee to write the piece. Lee is on the board at Freedom of the Press Foundation (FPF), a non-profit that announced it would withdrew support for WikiLeaks last year. Lee, Assange claimed, is engaged in an “obsessive, obscenity laden campaign against WikiLeaks” and, for him, the journalist’s ties to FPF represent “conflict of interest.”

In relation to the Intercept's article today (see thread):

– the editorial propriety of letting Micah F Lee, of all people, instrumentalize the Intercept to further his obsessive, obscenity laden campaign against WikiLeaks must be questioned. Lee was formally behind cutting off WikiLeaks' US tax deductible donations.

– after I wrote to the FPF board last year on that serious subject, Lee has become hysterical. The conflict of interest is obvious. Such a story should have been given to someone else. By failing to do so the story's credibility has been marred.

WikiLeaks cannot confirm any Twitter supporter group messages
– @WikiLeaks does not retain such messages
– WikiLeaks has not been contacted by the authors
– the article claims the group was a "low security group" for "supporters" and was not set up by WikiLeaks.