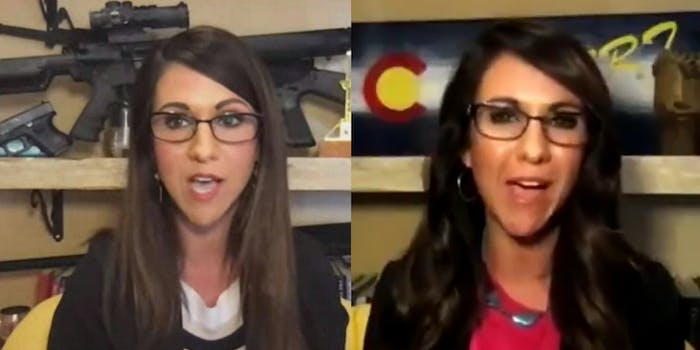 People online wondered where all of her guns went.

Last month, Rep. Lauren Boebert (R-Colo.) took part in a virtual House committee hearing with a large display of firearms framed behind her.

But in a recent interview in the wake of the deadly shooting in Boulder, the Colorado congresswoman and vocal gun rights supporter didn’t have the same display behind her—and people online noticed.

Boebert’s gun display in February featured two AR-15 style rifles, a large firearm, and a handgun on several shelves, according to the Washington Post. After being criticized for the display by a Democratic colleague during the hearing, Boebert defended herself, saying that it was an “enumerated right.”

On Tuesday, Boebert posted a clip of an interview she participated in on Newsmax where she defended gun rights amid the mass shooting in a Boulder, Colorado supermarket that left 10 people dead.

However, her display of guns that were featured so prominently during the House hearing were nowhere to be found in the Newsmax interview. Instead they were replaced by several books and a piece of artwork.

A lot of people on Twitter were quick to notice that the gun display vanished as a deadly shooting took place in her state.

“You moved your slaughter weapon decorations,” another wrote.

Boebert’s team did not immediately respond to a request for comment.