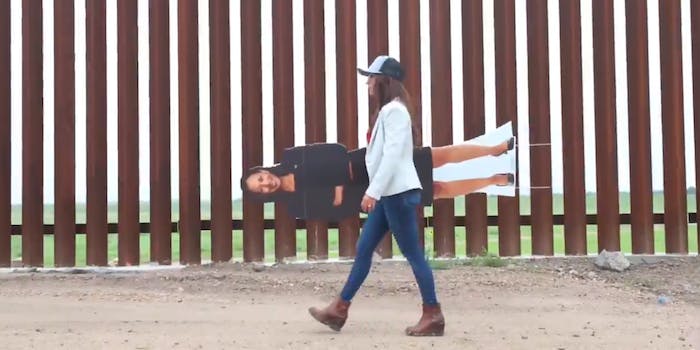 Nothing says 'border crisis' like a cardboard cutout and a sweet guitar riff.

Boebert posted a video from the border with a cardboard cutout of Vice President Kamala Harris. Many are finding it unintentionally hilarious.

The video begins with Boebert, resplendent in jeans, trucker hat, and wedge-heeled boots, in front of a section of border wall. She’s there to see “what’s up.”

“Unaccompanied children being sent on this journey alone and even worse, given over to the cartels, that is way, way up.”

Boebert claims that funding for border control is down, and says the media isn’t covering immigration. She fails to mention that the government is currently operating on the budget created by the previous administration. President Joe Biden’s proposed budget includes funding for the Department of Homeland Security equal to last year’s.

There are numerous stories about immigration and the border in outlets around the world, including the Daily Dot.

She wasn’t done yet. Boebert accused Harris of not doing “a single thing to protect the American people” since Biden put her in charge of the 2,000-mile border two months ago.

“She hasn’t even been down here to see the border or the tens of thousands of children wrapped in aluminum foil,” Boebert added. Harris was in Mexico the day Boebert posted the video.

Then she served the main course: the cardboard cutout.

“I brought Kamala down to see exactly what this regime is responsible for with their man-made crisis,” she said, brandishing the cutout.

“Now Kamala, I want you stand here and look at what you’ve done,” Boebert concluded, placing the cutout facing the wall as an electric guitar wailed.

Maybe it was the cheesy music, or the cardboard cutout, or the part when Boebert carried it in slow-motion; but people had a hard time taking it seriously.

“Well done. In the fine Clint Eastwood tradition of Republiqans talking to the imaginary voices in their heads,” opined Twitter user @Autarkh, adding the ‘q’ to Republican in an apparent nod to Boebert’s QAnon beliefs.

Several suggested Boebert’s time would be better spent at home in Colorado. Other brought up the 2004 charges against her husband for exposing his genitals to a minor at a bowling alley.

“So. You flew 1,000 miles from your district on the taxpayers’ money to shoot a campaign ad. Meanwhile, driving through CD-3 yesterday I saw evidence of the worst drought in recent memory. Why are you in Texas, and not in Colorado?” wondered one. (It’s not known who paid for the trip.)

On Thursday, Politico posted a scathing story about Boebert in which her constituents complained of feeling “humiliated” by her antics and believing she’s more interested in personal acclaim than representing them.