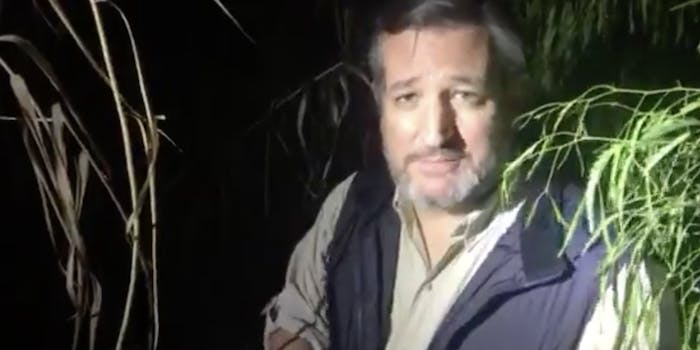 Ted Cruz mocked for lurking in bushes, being ‘heckled by cartels’ at the border

'Ted Cruz is more upset about being heckled by cartels than when Texans literally froze to death.'

Sen. Ted Cruz (R-Texas) inadvertently spawned an onslaught of memes this week following a visit to the U.S-Mexico border.

In a Twitter post on Thursday, Cruz shared a video from the banks of the Rio Grande river while discussing the surge in asylum seekers under President Joe Biden.

“We’re at the Rio Grande; the water is right behind me,” Cruz begins. “I’m on the Texas border along with 18 senators. We made the trip to see the crisis that is playing out.”

Cruz also claimed human traffickers and cartel members yelled at them, and the GOP later said the group was “heckled by cartels.”

While Cruz’s video was focused on the situation at the border, Twitter users couldn’t help but notice how strange it looked to see the senator rummaging through the bushes.

Many also used the moment to poke fun at Cruz’s controversial Cancún trip during Texas’ snowstorm.

“Ted Cruz is going to get to Cancun by any means necessary,” @Angry_Staffer said.

“Is it me or does Rafael Ted Cruz seem to be morphing into Fidel Castro?” @Route_60plus questioned.

But the mockery of Cruz did not just come from everyday Twitter users. Former Democratic presidential candidate and fellow Texan Beto O’Rourke also weighed in on the matter.

“You’re in a Border Patrol boat armed with machine guns. The only threat you face is unarmed children and families who are seeking asylum (as well as the occasional heckler),” he tweeted. “If you’re looking for a crisis to cosplay Senator for, I’m happy to point you in the right direction.”

Biden has also pushed back on claims from Cruz and other Republicans that his policies are to blame for the influx at the border.

“I’d like to think it’s because I’m a nice guy, but it’s not. The reason they’re coming is that it’s the time they can travel with the least likelihood of dying on the way because of the heat in the desert, No 1,” Biden recently said. “No. 2, they’re coming because of the circumstances in their country.”