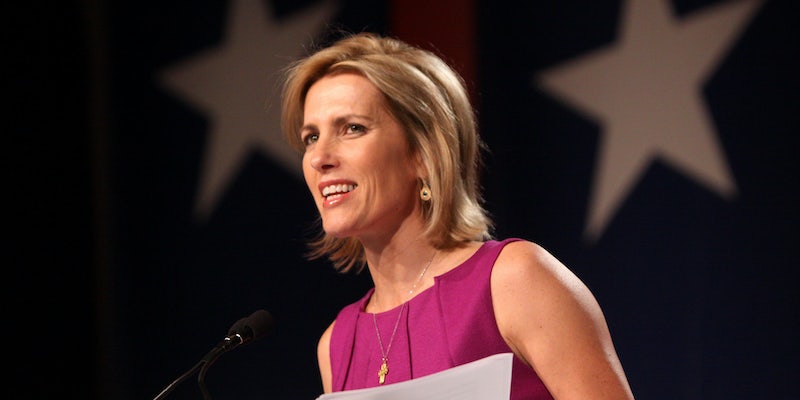 Laura Ingraham’s Twitter has certainly not been the place to go for accurate, unbiased coronavirus reporting. But on Friday, the Fox News host sent out a message so baffling, it caused “Toronto is in Canada” to trend.

“Will Joe Biden do more to protect religious liberty than Donald Trump? Not a prayer,” she wrote, linking to an article titled ‘City of Toronto Bans Catholic Churches From Administering Holy Communion.’

So, a few things to dig into there.

First, the city of Toronto has not “banned” communion.

Toronto Public Health issued “COVID-19 Guidelines for Places of Worship” on July 8, suspending communion, as well other “close contact activities.” The suspension also extends to a number of other practices common across multiple religions, including “sharing and distribution of materials and objects such as books, communion objects, microphones, prayer mats, prayer shawls, water, chalices.”

Additionally, the Archdiocese of Toronto had previously announced plans to modify communion for safety reasons.

That considered, it hardly seems like an example of “Canada’s war on Christianity” as declared in the article Ingraham tweeted. That piece came from Big League Politics, a site that has “promoted conspiracy theories and written favorably about white nationalist candidates,” according to the New York Times.

And then, there’s the bizarre comparison of Trump and Biden’s stances on religious liberty in response to a story about Toronto—which, as Twitter would like to remind you, is in Canada.

Others ran with the joke.

“If this gets out, Biden will never carry Toronto,” warned one user.

“I woke up and saw ‘Toronto is in Canada’ and I just KNEW that Fox News had sum to do with this,” tweeted another.

Even David Hogg, a longtime target of Ingraham for his gun reform activism, got in on it.

Some Canadians chimed in, calling Ingraham’s tweet “beyond laughable and quite sickening” and asked her to “leave my country out of it.”

As of publication, Ingraham’s tweet is still up, and she has yet to respond to the criticism.