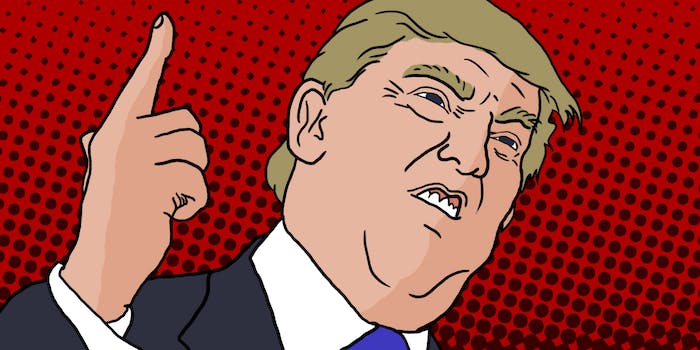 Kids bash Donald Trump by calling him a ‘racist d**k’

Did Latino American kids give Trump a taste of his own medicine?

This isn’t the first time Latinos have accused Donald Trump of being a racist. But it’s probably the first time the criticism has come from children, especially ones with mouths like this.

The political action committee Deport Racism decided to go after Trump with some help from the very people who Trump and other Republican 2016 presidential candidates have targeted the most aggressively: the kids of Latino immigrants.

The claims of racism against Trump started almost immediately after he announced his run for the 2016 Republican presidential nomination on June 16, when expressed strong and controversial opinions about Mexican immigrants.

“They’re rapists,” said Trump during his nomination announcement, “and some, I assume, are good people.”

According to Trump, Mexican immigrants are not only rapists, but they are bringing crime and drugs to the U.S. In the first GOP debate, he said he plans to build a wall to better block illegal immigration from Mexico.

Rosa and Rick, Latino kids born in the U.S., responded in the video to Trump’s comments on Mexicans and Latino immigrants in the most explicit way possible: by calling him a “racist dick.”

“When you say Mexican immigrants are rapists, murderers, and drug dealers, you know it’s racist code for words like s***s, w******s and b****rs,” the kids say in the video.

“And you attack people for speaking ‘Mexican’ in this nation … umm … It’s Spanish, idiota,” they say together in the video. “Maybe a little less hairspray and more education, millions of working Latinos would be deported if you get your loco way.”

“I don’t have a racist bone in my body.”

“Kids are precisely the people that are being attacked, one of the main groups that are being attacked with these racist attacks,” Montgomery told the Daily Dot in a phone interview. “[Trump] unapologetically calls these children, who are Latino and who are American citizens, ‘anchor babies’—a racist, derisive term—and talks about stripping them of their constitutional rights, and deporting them and their families.”

Montgomery condemned the way “these racist Republicans” portray the children of Latino immigrants “as having less rights than other Americans.”

“They’re owning it. They’re saying, ‘This is our country, and if you don’t like our Constitution, you can leave!’” Montgomery said, adding that “there’s nothing American about attacking immigrants.”

Trump has spent little energy during his campaign to fight back the repeated accusations of racism that have followed the real estate magnate for years. In July, however, he offered, in an interview with Entertainment Tonight, perhaps his most straightforward rebuke of his critics so far.

Montgomery justified the children’s language used in the video, calling it “bad words for a good cause.”

“The real offensive language in this whole discussion around immigration is this racist rhetoric that’s coming from Trump, saying that Latino immigrants are rapists, are drug dealers, calling American citizens ‘anchor,’ as if they’re somehow less valuable people,” Montgomery said. “We see this attack on ‘the other’ all the time. We see this offensive language being hauled at Latinos.”

“What’s more offensive: a four-letter word, or talking about deporting 11 million people … or talking about changing the Constitution to take away rights from people just because you don’t like that they’re brown? It’s totally un-American,” he added.

Montgomery, a white gay man who lives in Mexico, encouraged others to join in the fight for Latino immigration rights.

“When people are attacked, it shouldn’t be left to just the people who are being attacked to speak up and stand up for their rights,” he said.

Deport Racism has been around for about six weeks. The group will be advocating for Latino immigration rights from now until Election Day in 2016. In addition to the video above, the PAC put up a $5,000 bounty for an audience member to yell, “Trump is a racist!” or “deport racism!” when Trump hosts Saturday Night Live on Saturday, Nov. 7.

Trump maintains that he could win the Latino vote with a focus on economic issues. He is head-to-head with Ben Carson for the Republican presidential nomination. Both are leading in either national or state polls.