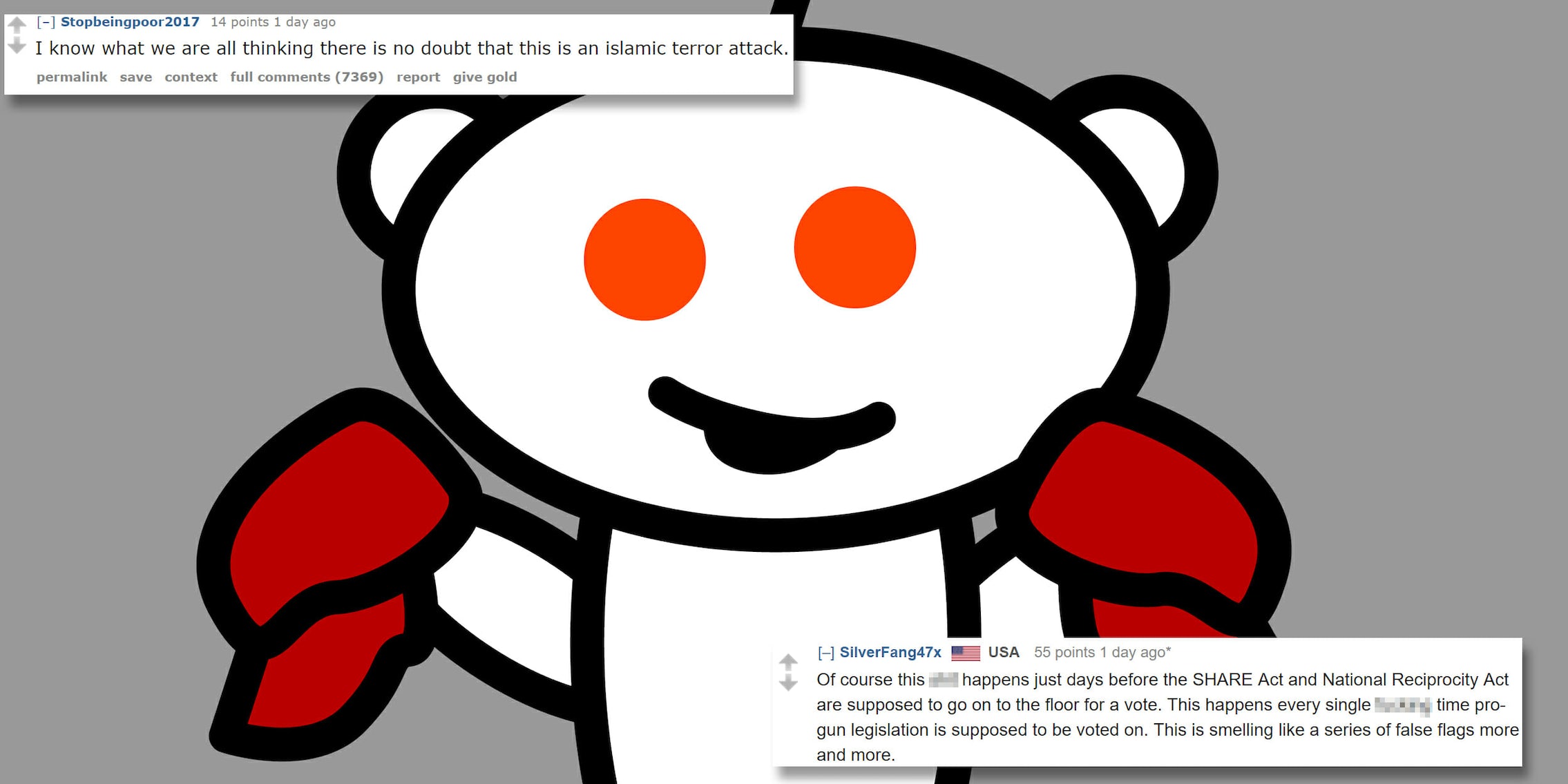 They think something 'fishy' is going on.

Comments related to the shooting on The_Donald, one of Reddit’s most active communities, reveal an uncensored, near-real-time view of how the president’s ardent supporters digest news of mass violence in ways that further their political views.

In the hours after the shooting, which ultimately left nearly 60 people dead and approximately 500 people wounded, some users of The_Donald began speculating who might have been responsible for the attack.

Members of the vehemently pro-Trump community initially assumed the shooter was Muslim and called for greater aggression against believers of the Islamic faith. These first guesses were predictable, given the subreddits’ history for racist, inflammatory rhetoric.

Authorities believe that Stephen Paddock, a 64-year-old white man, shot at a crowd of people from the 32nd floor of the Mandalay Bay hotel in Las Vegas. Police say they found Paddock dead in the hotel room, where he had nearly two dozen firearms and devices that can be used to make a semi-automatic weapon operate like a fully automatic one.

Following reports about Paddock’s identity, comments on The_Donald quickly shifted from criticism of Islam to intense skepticism of the media, conspiracy theories, and calls to withhold judgment about the details of the situation. The stark contrast between the community’s conversations prior to authorities identifying Paddock and afterward soon went viral among other Reddit communities.

Without a suspect to interrogate, police have yet to release a motive for the attack–which has some members of The_Donald thinking the entire incident was a ruse to further an agenda.

Essentially, many members of the community think something “fishy” is going on.

“I think most people question if he was a pasty, not that people died, as this whole thing is weird,” one user, NIU8484 wrote on Tuesday. “Why is there no pictures of this guy? No motive yet? There’s just a ton of info not released yet and it’s baffling. Plus the 4chan post from a user named [J]ohn about a mass shooting event in Henderson or Las Vegas from [S]eptember 12th.”

One thread on The_Donald, which only gained minimal attention, laid out the reasons some found Paddock’s involvement dubious.

“Had no military training like Adam Lanza did but seemingly turns into Rambo overnight despite no violent tendancies [sic] overtly shown prior to event,” wrote Diotima245. “Seems to be intelligent and methodical due to his ability to gain wealth and be a pilot. Why would someone on the downslope of his life suddenly decide to become a mass murderer?… The media wants us to believe the motive was his gambling habits and that he ‘kept to himself’. No one decides to preplan a mass shooting with thousands of dollars of equipment and conduct it almost like a military operation; unless they had help planning it out imo. This was not some last minute thing; this event took days if not weeks to plan out. Anyways I want more details… but the whole thing smells.”

The conspiracy theories of a false flag operation come on the heels of members of the far-right spreading uncorroborated speculation that Paddock had ties to “antifa,” the far-left group perhaps best known for engaging in violence with white supremacists. Similar speculation cropped up on The_Donald.

“You know as shitty as this sounds at this point I wouldn’t be suprised [sic] if this guy was deployed by the left to do this so they could try to take the guns away,” Dick_Butts90210 wrote.

Critics of The_Donald have long speculated that the community has been infiltrated by Russian trolls attempting to sway the conversation, although no such activity has so far been publicly proven. On Tuesday, the Guardian reported that Reddit may join Facebook and Twitter as part of an investigation by Congress into Russian interference in the 2016 election. The now-infamous “Pizzagate” theory, which falsely linked Hillary Clinton to a child sex ring, grew in popularity on Reddit.