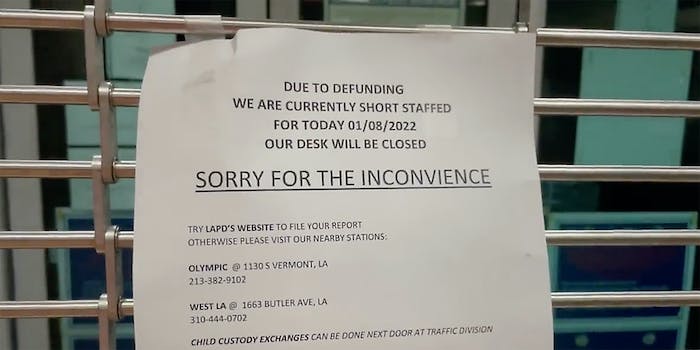 ‘A demonstrable lie’: LAPD called out for blaming ‘defund the police’ on precinct closure when 800 cops are out with COVID

The number of officer in COVID quarantine has multiplied in weeks.

The Los Angeles Police Department (LAPD) is taking heat for reportedly claiming a station was temporarily closed due to defunding. Many believe that, rather than budget cuts, COVID-19 is actually to blame. The LAPD budget increased this year.

A viral tweet by @FilmThePoliceLA shows a sign that was reportedly outside the LAPD’s Wilshire station earlier this week.

The sign reads, “Due to defunding we are currently short staffed.” It says the desk will be closed for the day.

The LAPD confirmed that the station was temporarily closed. “The station front desk was closed until the afternoon due to a shortage of personnel,” an LAPD spokesperson told the Daily Dot via email Thursday morning. The LAPD did not answer questions about what caused the staffing shortage.

The LAPD didn’t immediately respond to a request to clarify when specifically the station was closed and for how long.

The department referred the Daily Dot’s questions about the Wilshire station’s budget to the mayor’s office.

L.A. Taco reports that Police Chief Michel Moore told William Gude, who runs Film The Police LA, that such a sign would be “inappropriate.”

A department spokesperson told L.A. Taco, “It was determined that an officer placed the sign and a complaint has been initiated.”

In subsequent tweets, Film The Police LA said it filed a formal complaint over the sign. A picture of the complaint contained therein claims the station posted a public message “that contained false information” and “used pandemic as an opportunity to post political message meant to deceive public.”

Film The Police LA also tweeted a screenshot of Chief Moore’s purported response. “I’ve directed an immediate inspection of the door as well as review of any CCTV coverage of the door in an effort to identify who is responsible,” Moore reportedly wrote, adding that it’s possible someone outside the department posted the sign “in an effort to embarrass us.”

Many agree with the account’s criticisms of the LAPD.

“They can’t even write a NOTE without putting a demonstrable lie on it,” opined one Twitter user.

“Defund the police” was a controversial rallying cry during civil rights protests in the summer of 2020 sparked by police killings of George Floyd, Breonna Taylor, and others. Advocates calling to cut funding largely wanted some police funds appropriated to social services and community development.

A few jurisdictions heeded such calls, but most did not. Some, like Los Angeles, cut their police budgets small amounts only to restore some or all of the funding.

In 2020, Los Angeles cut the police budget $150 million. The Los Angeles Times reports nearly a third of that was subsequently restored by overtime costs. LAist reports that the city increased the LAPD budget by $41 million the following year, for a total of $1.76 billion.

The LAPD is asking for an additional $213 million for the upcoming year.