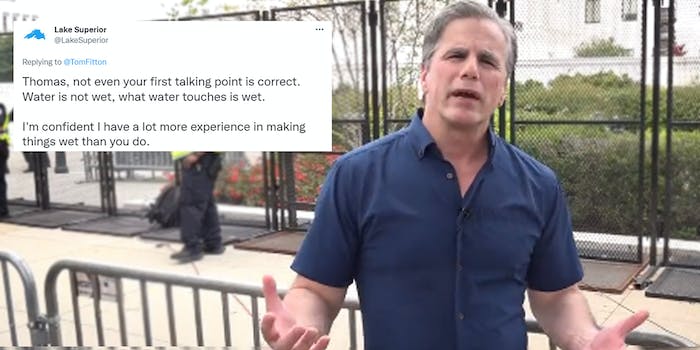 'This lake vehemently stands with women having the right to choose.'

Imagine getting owned by a lake. The president of a right-wing activist group doesn’t have to imagine. Tom Fitton of Judicial Watch recently experienced firsthand what it’s like to lose a war of words with a body of water.

“This lake vehemently stands with women having the right to choose,” @LakeSuperior tweeted.

Fitton responded with this pithy retort: “Water is wet and abortion kills a human being.”

Lake Superior, which isn’t officially affiliated with the actual body of water, wasn’t having it.

“Thomas, not even your first talking point is correct,” they replied coolly. “Water is not wet, what water touches is wet.”

“I’m confident I have a lot more experience in making things wet than you do.”

Several made references to the Edmund Fitzgerald, a ship that sank in Lake Superior in 1975, killing all 29 onboard.

“You haven’t wrecked anyone this bad since the Edmund Fitzgerald,” said @theillegalsegal.

Jokes rained down upon Fitton.

The lake is freshwater; as they often point out on Twitter, it contains 10% of the world’s surface freshwater.

The person who runs the Lake Superior account told the Daily Dot that, while they mostly focus on “celebrating fresh water, Great Lakes science, and clever water puns, there are some issues so large in scale that they outweigh the importance of ‘Just stick to water, lake!'”

The individual, who declined to be identified, said that they have a lengthy and close relationship with the lake they play on Twitter. “I have a long and rich history with Lake Superior and interact with it nearly each and every day. My toes were in Lake Superior just this morning.”

“This is one of the rare times I’ve touched on subjects outside of water politics and local politics, and want to know that the women of my shores have an ally,” Lake Superior added.