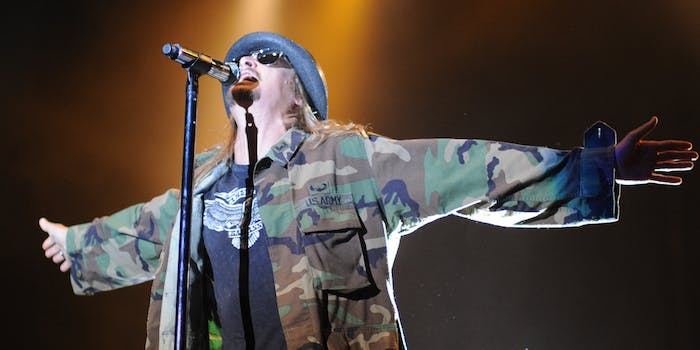 Ever since gaining mainstream notoriety 17 years ago with his breakthrough album Devil Without a Cause, country/rap/rock star Kid Rock has been something of a pop culture rorschach test. Songs like the Upper Peninsula, redneck anthem “All Summer Long” either speak to you or make your skin crawl with lyrics about “sipping whisky out the bottle” and “not thinking ’bout tomorrow.”

But a recent picture of the “Bawitdaba” singer has created a new dividing line in the culture war. A photo of Kid Rock taken with a mountain lion he presumably shot and killed on a hunting trip has triggered a backlash from animal rights activists while drawing support from pro-hunting fans.

The photo was initially posted on Facebook by fellow rock star, Michigan native, and cultural lightning rod Ted Nugent on Jan. 3. The post includes three photos, including one of Nugent and Kid Rock together dressed in camouflage hunting gear and holding up the body of the dead mountain lion. (In case you’ve never been on Nugent’s Facebook page, photos shared by the Motor City Madman alternate regularly between hunting trophies and electric guitars.)

Nugent writes: “And what a grand conservation New Year it is! HAIL my MotorCity boy KidRock for saving all those muledeer elk & livestock by whacking this magnificent mountain lion. I can hear the braindead squawkers already with their obscene denial that killing lions is wrong. Its legal its necessary its good its beneficial its a damn riot!”

And although Nugent once called President Obama a “subhuman mongrel” and wondered aloud if the nation would be better off had the Confederacy won the Civil War, for once he was right about something in assuming that the picture from his hunting trip would draw the ire of online commenters. So far, the post has more than 32,000 likes and 3,900 comments, representing a mixture of condemnation and support.

“I’m not against hunting… not at all… but seeing a predator in a state like this disgusts me, and that smile even more. Respectless…”

“I understand the part when he says they are helping protect muledeer and elk herds, but THEN he starts talking TROPHY and FUN!?! SMH”

Event PETA’s U.S. Senior International Media Director, Ben Williamson, weighed in, saying, “It’s obvious that not everyone has evolved mentally and emotionally when you see someone grinning after gunning down another living being who was busy minding his or her own business and living life. These days, only the very smallest percentage of people find it acceptable in any way to support blood sports like trophy hunting.”

But in fact, Kid Rock and Nugent found plenty of supporters who commented on the photo to praise their trophy and dismiss critics.

“That’s a good looking cat. You need to post it after you get it stuffed if anything else just to piss off the bleeding hearts.”

“God forbid one of these liberal f*cktards that are anti-hunting ever have one of their kids mauled by a predator. They would be first in line wanting new legislation passed and government funding appropriated for keeping these animals out of their backyards.”

Kid Rock isn’t the only celebrity to come under fire for posting hunting photos online. Last year, comedian and television personality Joe Rogan was hit with a social media backlash after sharing a photo of a black bear he shot and killed.

For his part, Kid Rock has not responded to the controversy surrounding the photo. Regulated cougar hunting is allowed by the U.S. Fish and Wildlife service in the western United States, except in California. And the World Conservation Union lists cougars as a species of “least concern” from a conservation standpoint.

So despite the uproar over the photo, it appears there will be no real consequences for Kid Rock.