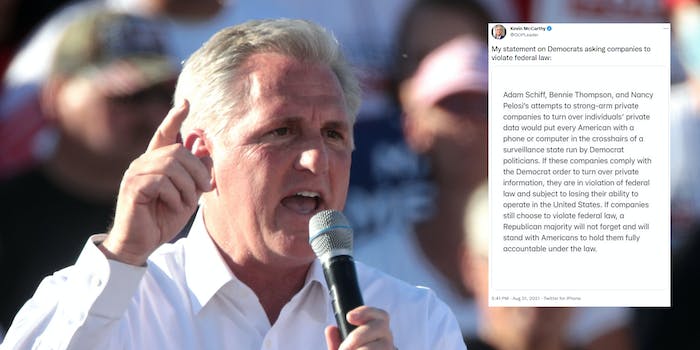 The committee is seeking records from telecom and tech companies.

House Minority Leader Kevin McCarthy (R-Calif.) warned telecom companies on Tuesday that Republicans would “not forget” if they handed over records to the committee investigating the Capitol riot.

The Select Committee to Investigate the Jan. 6 riot at the Capitol has reportedly asked telecom companies and social media companies to preserve records of people in the lead-up to the riot.

Last week, the committee asked 15 social media companies ranging from Facebook to Gab to preserve any records they have about misinformation about the 2020 election and efforts to “overturn, challenge, or otherwise interfere with the 2020 election.”

Meanwhile, ABC News reported that the committee is seeking phone and email records and sent out 35 requests to email, telecom, and social media companies.

Requests were sent to AT&T and Verizon, according to the report.

In response, McCarthy sent out a statement late on Tuesday where he said that the “Republican majority will not forget” if the companies comply with the requests for information.

“If these companies comply with the Democrat order to turn over private information, they are in violation of federal law and subject to losing their ability to operate in the United States,” McCarthy said in the statement, which he tweeted. “If companies still choose to violate federal law, a Republican majority will not forget and will stand with Americans to hold them fully accountable under the law.”

Many people online suggested that McCarthy’s statement could be seen as obstruction of justice.

Meanwhile, the Capitol riot committee responded to McCarthy’s tweet saying that it wouldn’t be “deterred” by the Republican’s statement.

“The committee’s efforts won’t be deterred by those who want to whitewash or cover up the events of January 6th, or obstruct our investigation,” the committee wrote, quote tweeting McCarthy.