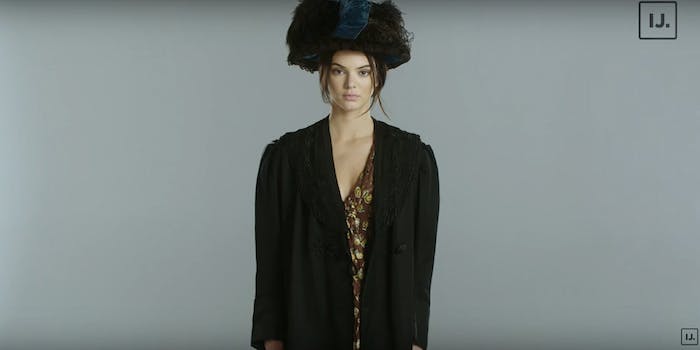 Kendall Jenner wants you to rock the vote in 2016

Voting hasn't always been easy, especially for women. The lesson: everyone should participate.

Jenner’s following on Twitter alone is nearly equivalent to the combined followings of President Barack Obama and the two leading candidates to replace him, former Secretary of State Hillary Clinton and businessman Donald Trump.

It would be foolish, therefore, to underestimate 19-year-old Jenner’s ability to influence voter registration in the 2016 election when she steps in front of a camera and asks her followers to “rock the vote.”

Tuesday is National Voter Registration Day, so Rock the Vote and IJ.com brought in Jenner to give a brief oral history of the women’s suffrage movement. She explains the story of a struggle for rights that was deeply tied to voting and other political behavior, from Susan B. Anthony founding the National Women’s Suffrage Association in 1869 to the ratification of the 19th Amendment, giving women the right to vote, more than 50 years later.

“Every day we vote,” Jenner says, while changing outfits that roughly reflect these important milestones in the history of women’s rights. “We’re able to express our opinions online with likes and hashtags. But when it comes to the right to vote, it hasn’t always been that easy—especially for women.”

“Because of suffragettes and their battle, gender doesn’t matter. But your vote always can,” she continues. “I’m Kendall Jenner. I’m 19. And I’m here to Rock the Vote.”

Independent Journal Review, who produced the video, noted on its website that not a single presidential candidate—including Donald Trump—has a reach comparable to Jenner’s. “[She] has more Instagram followers than all the candidates combined,” the website said.

“Celebrity has long played a role in politics, but especially in 2016, with Clinton meeting actors, musicians, and reality stars at fundraisers on the left, and Trump parlaying his fame into a poll-dominating political run on the right,” IJ added. “It’s the perfect election for a family like the Kardashians and Jenners, who haven’t been shy sharing their political opinions, to weigh in.

“And whether you agree or disagree, the one thing you can’t do is ignore them.”