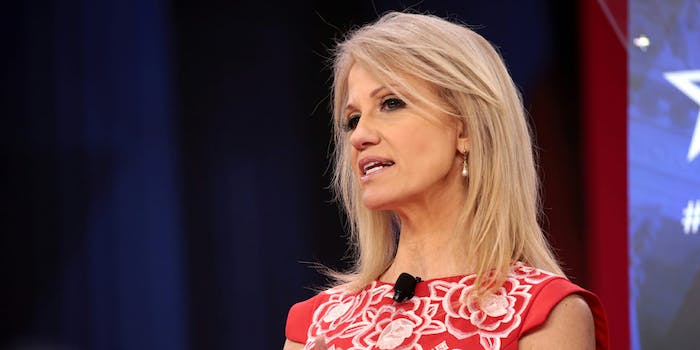 She's not sure Trump has watched the show.

Kellyanne Conway, a counselor to President Donald Trump, has spent her Thursday dodging questions about a Game of Thrones-style poster the president spread out on a table during a cabinet meeting yesterday.

The poster, which had a picture of the president and “Sanctions are Coming” written on it in a font similar to the HBO show, was also tweeted by the president late last year.

Conway was asked about the poster several times on Thursday—and dodged a question by a reporter who pointed out that the tagline on the poster comes from “Winter is Coming,” a reference to the Stark house motto portending the coming of winter, a time when White Walkers and wights—or as one reporter said, zombies—attacking.

When asked about the comparison between “Sanctions are Coming” and “Winter is Coming,” Conway said she wasn’t sure if the president had seen the show and thus understood the grim undertones of the phrase they were playing off in the poster.

Does President Trump watch @GameOfThrones? Yesterday he prominently displayed his “Sanctions are Coming” poster during a cabinet meeting. Today I asked if he has seen the show and why he would compare his economic policies to a Zombie apocalypse… pic.twitter.com/2BoFnFGXsA

Meanwhile, on Fox & Friends, the White House counselor essentially brushed off the question about the poster.

When the hosts asked her “what was with the poster” at the cabinet meeting, she pushed past it quickly.

“That was just the president saying sanctions are coming Nov. 4,” she said, before pivoting to Trump’s “transparency” and holding a meeting for “95 minutes.”

FOX & FRIENDS: Kellyanne, what was with Trump putting a poster of himself on the table yesterday during the cabinet meeting?@KellyannePolls: "Ah, that's just the president saying 'sanctions are coming Nov 4.' I think the president speaking for 95 minutes shows his transparency" pic.twitter.com/jZsL9cdoS5

The hosts asked Conway what the “message” was with the poster, to which she replied:

“I’ll let it speak for itself.”